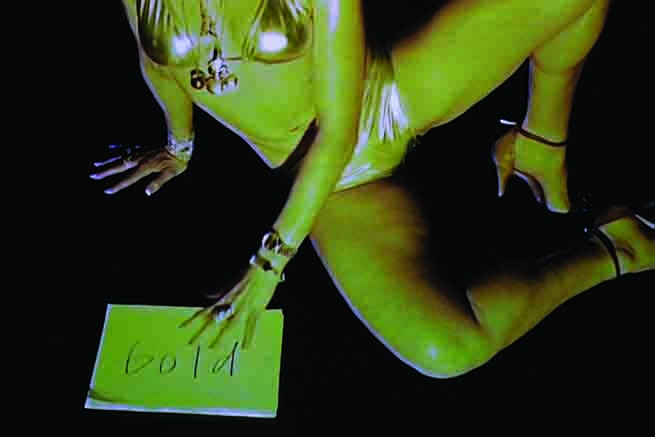 Alexandra Bachzetsis presents a new performance of PRIVATE: Wear a mask when you talk to me (2016) and Gold (2004) in the rooms of Two Temple Place, a highly ornate building designed by one of the foremost neo-Gothic architects of the late 19th century, John Loughborough Pearson.

The UK premiere of the solo performance Gold, performed by Lenio Kaklea, addresses the bodily commodification that occurs in the choreographic vernacular of pop videos: it deconstructs a range of movement, postures and poses to a dance track of music by Missy Elliott, Kelis and Khia, revealing the unrefined composition of the performer as a commodity.

Alexandra Bachzetsis (born in Zurich) is an artist, performer and choreographer based in Basel and Zurich. Recent presentations have taken place at the Pompidou Centre, Paris, 2015; Art Basel Parcours, Zurich, 2015; Tate Modern’s live online programme Performance Room, 2014; the Stedelijk Museum, Amsterdam, 2013 and dOCUMENTA (13), 2012. In 2008 she took part in the 5th Berlin Biennial for Contemporary Art and had a major solo exhibition show, curated by Adam Szymczyk at the Kunsthalle Basel.

The project is supported by the Swiss Cultural Fund UK