Burroughs: The Movie which opens on Friday 14 February at the ICA, explores the life and times of Naked Lunchauthor William S. Burroughs. Completed in 1983 by Howard Brookner. 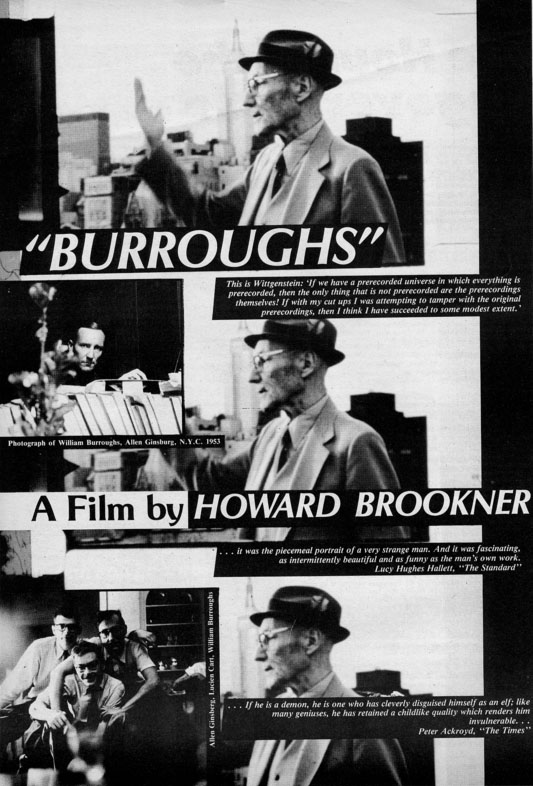 Burroughs: The Movie, which opens on Friday 14 February at the ICA, explores the life and times of Naked Lunch author William S. Burroughs. Completed in 1983 by Howard Brookner, it was the first documentary ever made about Burroughs with his full collaboration. The film has recently been recovered and restored by his nephew Aaron Brookner, who explains how the process came about.

Growing up, I saw the poster for Burroughs: The Movie on the wall in my grandmother’s house. Before I knew anything of who he was, I knew his face. Then, before I had read any of his books I had seen Howard’s movie. From the age of ten, until I was about twenty I probably watched the film hundreds of times on VHS. Then I started reading Burroughs, startng with Howard’s copy of Junky.

Having seen clips of the film on YouTube in recent years, I started to wonder where the film itself was. Initially I started looking for the 16mm negative, but it seemed to have disappeared. I started to look for a print instead and found one in Australia. It was Howard’s festival print and when they brought it out it was really beaten up, so I couldn’t use it. Then I found one in Berlin, which had German subtitles burned into it. Finally I discovered that Howard’s long-­time partner, Brad Gooch, had donated a print to the Museum of Modern Art (MoMA) around the time Howard died. Brad had no recollec0on of this, which goes to show the state of shock his was in after Howard died.

MoMA agreed to release the print on one occasion, so that we could create a digital master of it, before returning it to their archive for safety. To make this process a reality we turned to Kickstarter. It was super encouraging to find out how many people, from the US to the Far East, were interested in the film.

Today I think the film is incredibly refreshing to watch. Burroughs: The Movie is raw and pure, but with the story of an incredibly complex character unfolding at its centre. Much of the subject matter is also very relevant today. At the time that the film was made Burroughs was contesting the Briggs Initiative and Proposition 6, which was an attempt to outlaw homosexuals from becoming teachers. Given what is happening in Russia now, this seems very timely.

I think I became a filmmaker thanks to Howard. The process of restoring Burroughs: The Movie triggered the realisation that he made other films that were also fascinating. I found the original 16mm material surrounding his second feature documentary, Robert Wilson and the Civil Wars, as well as a lot of other material. A lot of this material actually tells Howard’s story too. I have been wanting to tell Howard’s story for a long time and this was the perfect material to include in my film about Howard, Smash The Control Machine: Howard Brookner and the Western Lands, which is currently in production with Jim Jarmusch on board as Executive Producer.

Burroughs: The Movie opens on Friday 14 February, with a special Q&A on Sunday 16 February with Barry Miles, author of the first major full-length biography on Burroughs in more than 25 years.

This article is posted in: Articles, Film