In advance of this week's Culture Now (Friday 11 Oct, 1pm) with writer Paul Shepheard, we've got an extract from his recent book How to Like Everything (Zero Books, 2013). 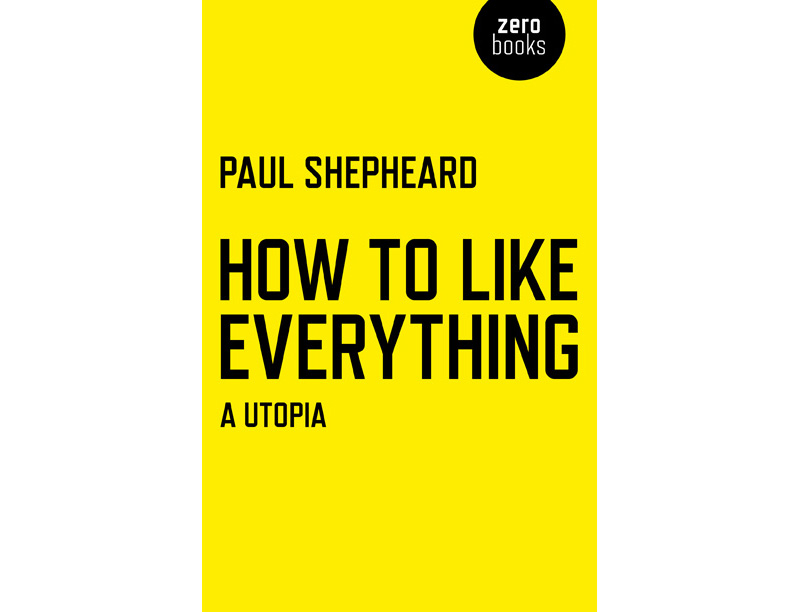 In advance of this week's Culture Now (Friday 11 Oct, 1pm) with writer Paul Shepheard, we've got an extract from his recent book How to Like Everything (Zero Books, 2013).

I am writing this in Amsterdam, Holland, the Netherlands, in an old Amsterdam canal-side house so lofty and with stairs so steep it has a crane on the top to hoist furniture up from the street and in through the huge windows.My studio overlooks the Old Church. The Dutch call it De Oude Kerk. One of Amsterdam’s ancient canals flows past the front door, its surface dark green and full of reflections.

The water inches by as slowly as the hands of the church clock. Yesterday a discarded television took all morning to float past, looking like a commentary on the futility of contemporary life, if your mind is of the sort that will wander that way. The canal moves in response to Amsterdam’s complicated regime of water management, which keeps the sea outside the dikes at bay. We are living below sea level here. Global warming is not some future terror for the Dutch; the movement of the tides and the level of the sea is their continuous present. The story so far is that the Old Church has been standing over there on the other side of the canal for maybe six hundred years. It fills my window with its ancient asymmetries and wonderful colours, a picture so solid and true it pushes out doubt. And yet, where we are is also what they call the Red Light District. All around me the little streets and alleys are filled with whores. They stand at the windows in their bras and pants pouting and knocking on the glass at the tourists who throng here night and day – and at me whenever I leave the house – and at the seagulls that flock the canals, come to that. They do it at everything. In the afternoons the sun hits the west front of the church like a clapper striking a bell and the pimps stand on the corners like policemen on duty and the seagulls screech round and round looking for something to steal and the whores stand and perform their sexual mimes. The picturesque and the salacious are all mixed together in this place like an emulsion.

Which is good, I think, because I am here, in this tall, canal-side house paid for by the art school, trying to make sense of my proposition How To Like Everything; this idea that crawled out of my head maybe two years ago now and has been lying at my feet writhing like a pole dancer ever since while I try to integrate it. And maybe that word ‘emulsion’ is what I want. An emulsion is a fluid where everything is not dissolved in the water but ubiquitously mixed – the particles are held together in suspension. Maybe that’s what needs to be done. Can I call myself an emulsionist? Keep all the balls in the air at once? Something so enticing and so complicated as How To Like Everything might not integrate, might not solve – might not dissolve – after all.

“Why do you want to do this?” My Dutch friends say. They whom my wife Lola calls the Inquisition. They travel in a pack of three and ask questions non-stop. Except when they giggle. They giggle like naughty boys. “What use is it to like everything?” they giggle. “Do you like torture? Do you like bombs? It’s so hard to like everything!” Collapsing in giggles. Once I visited some American friends, she the architect, he the painter of large grey canvases of girls on the edges of nervous breakdowns. He had a huge vinyl collection, as young men all did at that moment in history, but unusually it was a widely eclectic mix of stuff – he played Ella Fitzgerald, then Bartok, then Kate Bush, then The Chemical Brothers, then Coltrane – it was lovely.

“Oh sure, I like every kind of music, music is like the ocean. It swirls around the globe and connects us all up,” he said. I couldn’t have agreed more. It was lovely! I once drove for three hours across the desolate Rannoch Moor highlands, Scotland, UK, with my silent fifteen year old son, my eldest son now grown up and left home, listening to the heavy metal band Metallica – his choice – and I have loved that record ever since. And now it was so warm and giving in the broad ambience of this painter’s music collection, this man who liked every kind of music, that I wanted to hear it again – can we hear some Metallica? I said.

“But, but, but…” I stuttered, completely stalled by this about face. I searched lamely, mistakenly, for some description of the band’s quality to justify my choice: “but they’re so precise!”

“And that’s all they are,” he scowled.

It’s not enough to believe in nothing. To like something you have to frame its qualities somehow – which is why, when cornered, I called Metallica ‘precise’ – but then I could have said ‘mathematical’. I could have said ‘sweaty’. A quality is only a part of the story, part of the explanation; something your mind can grab hold of. There we were arguing over Metallica, when in actuality there was no Metallica present, only a chimera of Metallica in our heads. Things – and do all atheists think that people are things, or is it just me? – things exist in the world in all their actual complexity, but a thing is only itself, not an idea but a thing: one of countless millions of things in the world. Why do we try to overcome this? Why are we so keen to simplify and rank and grade? Is it innate or is it something we laboriously learn from infanthood on?

This article is posted in: Blog, Events