In October 2013 I began a collaborative PhD – The ICA: A History of the Contemporary – with Middlesex University and the ICA. 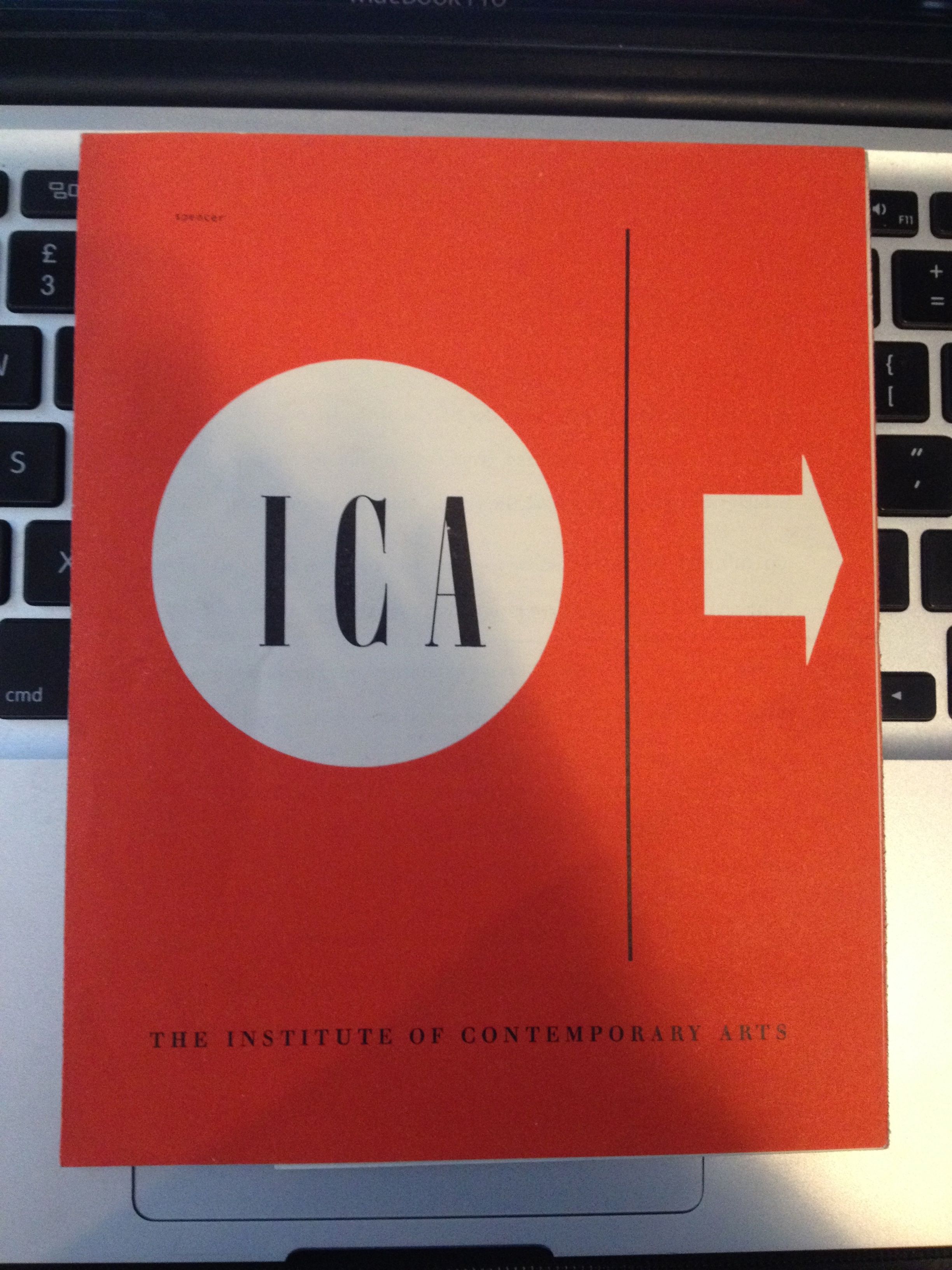 In October 2013 I began a collaborative PhD – The ICA: A History of the Contemporary – with Middlesex University and the ICA. This is the first of a series of blogs that focus on a single item from its many dispersed archives¹.

The dichotomous title of my PhD is worth considering first of all: how can you write a history of the contemporary? The title contemporary can be understood as ‘a neutral condition of temporal coexistence between two or more entities’. (Richard Meyer, What Was Contemporary Art, 2013.)  With this relational term in mind how do you begin a history of an Institute that has had such wide-ranging influence across art forms, technology, science, theory and curatorial studies? Why look back when the ICA is an organisation that was established to look forwards, actively searching for the new.  Jasia Reichardt – exhibitions organizer for the ICA’s Cybernetic Serendipity (1968) and Flourescent Crysanthenum (1968) – once described it as a weathervane directed by currents in the air: ‘Nobody realised then that its role was not to have a role, to be a weathervane. Otherwise we might not find out what is in the air.’ (Fifty years of the future: A chronicle of the Institute of Contemporary Arts, 1947-1997.)

In the archive at Tate I came across a joint statement made by the Museum of Modern Art, New York, the Whitney Museum of American Art, and The Institute of Contemporary Art, Boston. It had been included as an appendix to the ICA London’s Bulletin in 1950, four years after its establishment. Written as the result of joint programming that year it announces their collective desire to look forwards, to be innovative and, importantly, to make this intention public. Three institutions ‘whose interests centre on modern art [affirm] their belief in the necessity of expression in the arts,’ define their collective function ‘as objective surveyors’ existing in order to present an ‘impartial review of the contemporary scene.’ They go on to say: ‘We believe that a primary duty of a museum concerned with contemporary art is to be receptive to new tendencies and talents.’ Why did the ICA London include this in their bulletin? It was in opposition to collecting organisations that the ICA decided not to collect: in order ‘to protect the freedom of art’ (Herbert Read in The ICA Forty Years of Modern Art 1907-1947). First termed a 'Museum of Living Art' (this was rejected in 1938), then the 'Museum of Modern Arts Scheme'; it later became the Institute of Contemporary Arts in 1946. Perhaps by including this statement it demonstrated an affinity with the ideology of these three American institutions to face ‘the modern’ yet survey the contemporary?  The ICA has evidently been ‘receptive’ to new practices from the start, ignoring any academically imposed disciplinary boundaries.

In contrast to this quote Lynn Cole, in one of the many attempts over the years to produce a history of the Institute, at the start of her proposal quotes from Man Ray’s lecture at the ICA (1954), Painting and the Future of Painting: ‘You can only get a glimpse of the possibilities of the future by looking backwards.’ My thesis positions itself somewhere between these two perspectives. It will use the ICA as a ‘site’, in the Foucauldian sense of the word, encompassing careful analyses of objects from exhibits, talks, and performances (both musical and live art) contained in the archives in order to consider their discursive formation within specific ‘sites’ of intellectual debate. As well as archival research it will include an oral history of individuals who have been instrumental in the shaping, framing and development of the ICA.

¹ The majority of the archives (from 1946 to the mid-1980s) are located at Tate Britain; later records are at the ICA; the British Library Sound Archive holds talks and discussions held at the Institute of Contemporary Arts, London, during the period 1982-1993; and the British Artist’s Film and Video Study Collection at Central Saint Martins Museum holds the ICA’s Videotheque from the 1980s and ‘90s as well as related ephemera. My research will also consider the non-institutional archives owned by the many people who have been instrumental in the legacy of the ICA.

This article is posted in: Articles