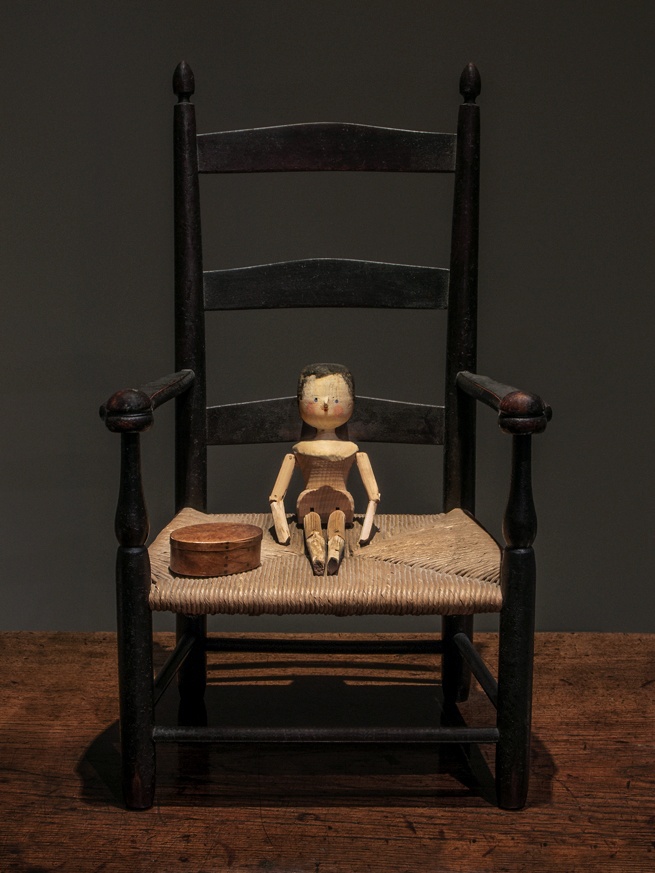 From her wooden sleep...Ydessa Hendeles

The ICA is pleased to present From her wooden sleep…, a major new work by the German-born Canadian artist-curator, Ydessa Hendeles. In this work, Hendeles draws together disparate elements to compose a tightly choreographed tableau vivant. Central to the installation is a remarkable and unique collection of 150 wooden artists’ manikins assembled by Hendeles over twenty years. Ranging from 1520 to 1930 and in scale from palm-size to life-size, the manikins surround a lone figure that stands exposed in their collective gaze. The intense focus of the scenario suggests a community gathering—perhaps in a courtroom, or at an auction, anatomy lesson or drawing class.

From her wooden sleep… continues Hendeles’s exploration of difference and diversity, in particular of the way representation and distortion, appropriation and assimilation filter group and individual identities. The title of the show is taken from Florence K. Upton’s best-selling 1895 children’s book, The Adventures of Two Dutch Dolls and a Golliwogg, about the nocturnal adventures of two wooden peg dolls. Created and named by Upton, Golliwogg was the first black protagonist in English picture books. He became a much-loved character among children, who were oblivious to its relationship to prevalent racial stereotypes considered acceptable at the time. His far-reaching popularity was superseded only by the teddy bear’s. He also bridged the gap between popular culture and high art by inspiring the most popular movement of Claude Debussy’s Children’s Corner suite. In the mid-20th century, however, the character became a controversial symbol of racism, his very name becoming a racist insult. Like earlier Hendeles curatorial compositions, From her wooden sleep… graphically realizes her interest in the way crazes define culture and social dynamics—for better and for worse.

Hendeles is a pioneering exponent of curating as a creative artistic practice. Blurring the line between collector, curator and artist, she has fashioned her own distinctive space in the contemporary art world. From her wooden sleep… is an extraordinary development in a singular career.

Hendeles was born in 1948 in Marburg, Germany, to Polish-Jewish parents who had survived Auschwitz. They emigrated to Toronto in 1951. Recent exhibitions include: Marburg! The Early Bird! at the Marburger Kunstverein (2010); The Wedding (The Walker Evans Polaroid Project) at Andrea Rosen Gallery in New York (2011); and THE BIRD THAT MADE THE BREEZE TO BLOW at Galerie Johann König in Berlin (2012). In 2003, Hendeles guest-curated Partners at the Haus der Kunst, Munich, a 16-gallery exhibition that included her own work, Partners (The Teddy Bear Project). Built around an archive of typologies of family-album photographs and vitrines featuring photographs of teddy bears with their original owners, the project was remounted in Noah’s Ark by the National Gallery of Canada (2004) and subsequently in 10,000 Lives, the 2010 Gwangju Biennale, South Korea.

The ICA exhibition is curated by Philip Larratt-Smith.

The artist gratefully acknowledges TACET Musikproduktion, Stuttgart, for the digital remastering of the original Welte-Mignon piano roll of Claude Debussy performing the ‘Golliwogg’s Cakewalk’ movement of his Children’s Corner suite (1908).

With thanks to Canada House for its support.

Please note that large bags will not be allowed in the exhibition space. Food and drink will also not be permitted. Strictly no photography. Children must be accompanied at all times.