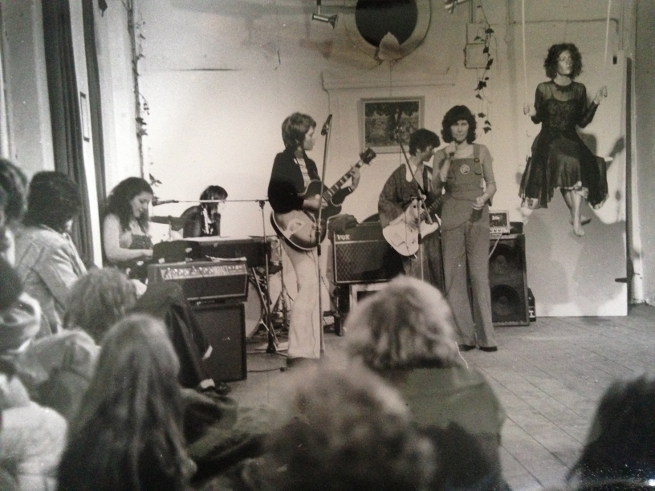 Women working collectively, what is your value?

With a focus on collectives that are rooted both in gender (eg. women as distinct from biological sex eg. female) and in place, this discussion considers whether women’s artist collectives can provide a resistance to the atomising individualism of neoliberal capitalism that is at the heart of current global art markets.

The panel rethink what artistic practice is and can be, where women’s collectives make a space not to recreate or infiltrate patriarchal hierarchies, but circumnavigate them.

With an emphasis on active engagement with others, on process rather than product, the panel look to collective art practices where its value relates to communities rather than commodities.

The panel consider feminism’s dual program: where it is both a method to recognise gendered group treatment and also an attempt to find a route to autonomy and liberation from such categorisation. In the light of these seemingly contradictory aims, speakers reflect upon the use of separatism in women’s only collectives.

Can these short-term strategies, that lay bare the painful aspects of society where gender continues to shape lives and dominate both economic and cultural spheres, prove to be effective strategies for achieving long-term goals?

This discussion brings together a range of voices to create a space for dialogue, elliptical associations and learning between generations.

Women working collectively, what is your value?

Angela Dimitrakaki is Senior Lecturer in Contemporary Art History and Theory at the University of Edinburgh. Her books include Gender, ArtWork and the Global Imperative: A Materialist Feminist Critique (2013), Politics in a Glass Case: Feminism, Exhibition Cultures and Curatorial Transgressions (2013, co-edited with Lara Perry), ECONOMY: Art, Production and the Subject in the 21st Century (2015, co-edited with Kirsten Lloyd) and, in her native Greek, Art and Globalisation: From the Postmodern Sign to the Biopolitical Arena (2013). She is Corresponding Editor for the interdisciplinary journal HM: Research in Critical Marxist Theory and recently joined Feminist Curators United.

Catherine Elwes, a video artist and writer, co-curated the feminist exhibitions Women’s Images of Men and About Time at the ICA (1980). These shows were born out of her involvement with the Women Artists Collective (formerly the Women’s Workshop of the Artists Union), and the Women’s Art Alliance. She went on to initiate a number of video events including the biennial UK/Canadian Film & Video Exchange (1998-2006) and Figuring Landscapes (2008-2010). Her videos have been shown widely both here and abroad and her work is in a number of public collections. Elwes is author of Video Loupe (2000), Video Art, a guided tour (2005), and Installation and the Moving Image (2015). Elwes is Professor of Moving Image Art at Chelsea College of Arts, UAL, and Founding Editor of the Moving Image Review & Art Journal (MIRAJ) (Intellect Books).

Rose Gibbs is part of the art/research collective The Temporary Separatists. She is an artist, writer and activist with an MA in Fine Art Sculpture from The Royal College of Art. She explores the space between collective and individual experiences of identity using the voice in participatory performances, as well as sculpture and sound intervention. Recent performances have included Performing Protest, Becoming Radical and Slogans for Becoming at The Function Room London, and Eastside Projects, Birmingham. She organises discussions, such as Taking Up Space –Women Only Shows - hosted by The Contemporary Art Society, and Reproducing Motherhood and is co-founder of a feminist art discussion group Practice in Dialogue at Chelsea College of Art. She writes for Huffington Post and works with The East London Fawcett Group. In 2013 she was director of the One Billion Rising Arts Festival.

Johanna Gustavsson is an artist currently based in Gothenburg, Sweden. Her work focuses on feminist, race and class-related issues, through mediums such as text, performance and social interactions. Her work has included numerous collaborations, fx: FAGS – Feminist Art Gallery Solidarity, radikal pedagogik, MFK - Malmö Free University for Women, the YES! association, I want a president... , Nobody Puts Baby In A Corner, The Production Unit. She was educated at Valand Art Academy in Gothenburg, Sweden and at the Whitney Independent Study Program in New York, US.

Margaret Harrison is a radical artist whose practice extends through fifty years since the late sixties. She was one of the founders of the London Women’s Liberation Art Group in 1970, as well as the Women’s Workshop of the Artist Union. Between 1973 and 1975 she collaborated with artists Kay Hunt and Mary Kelly to conduct a study of women’s work in a metal box factory in Bermondsey in London. They presented their findings in the installation Women and Work: A Document on the Division of Labour in Industry 1973-1975 that was first display at the South London Art Gallery in 1975.  Her work was included in the exhibition Issue: Social Strategies by Women Artists, curated by Lucy R. Lippard at the ICA, (1980) and has since been exhibited widely including at Tate Modern, Tate Britain and MOCA.

Sofia Landström is part of the art/research collective The Temporary Separatists. Her work focuses on feminism, exhibitions and feminist theorising. Her interest for exhibitions as a place for discussion and dialogue began during her time as chairman at Galleri Pictura in Lund. Here she realised how the exhibition premises not only encompass that what is hung on the walls, but is also influenced by everything that is taking place outside; politics, economy and social changes. Landströms current interest take their departure in the concept of ‘Women-Only-Shows´, using three Swedish exhibitions as starting-points; Kvinnfolk (1975) , Störning (1993) and Syster (2014). She investigates questions surrounding dissent and `models of resistance´, exploring where new narratives are being created as oppose to ghettoized. Landström has just completed her MFA in Exhibition Studies at Central Saint Martins in London.

Part of: Artists, what is your value?