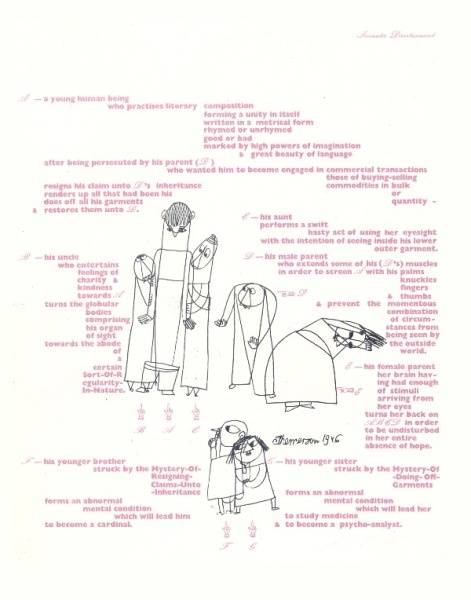 In conjunction with In Numbers: Serial Publications by Artists Since 1955 the ICA presents a survey of the publications by the Gaberbocchus Press, an avant garde publishing press founded by Franciszka and Stefan Themerson in 1948.

The imaginative invention of the Themersons' collaborations in experimental film throughout the 1930s reappeared when they were back together in London in the early 1940s, in the world of books. Franciszka (born 1907) and Stefan Themerson (born 1910) were married in 1930, and had already written and drawn a string of remarkable books for children in Warsaw throughout the 1930s. In 1948 they founded the Gaberbocchus Press, which over the next 30 years established itself as a leading avant-garde press in London, publishing some 60 titles which achieved a high standard of original book design (‘best lookers’ rather than ‘best sellers’, as Stefan once put it). Their dual ambition was to bring major modern continental works to a British audience, as well as contemporary writers and artists who found it difficult to publish work in a form they wanted (including themselves, of course).

Their own work, whether independent or in collaborations such as in the making of their photograms and films, the production of books or individual works like the Semantic Divertissements (1946), reveals something of the same appetites. Beneath a sense of play and hilarity lies an abiding moral sense. We should recognise a stand for individual freedom in Stefan’s invention, at once comic and serious, of semantic poetry ─ in his debunking of poetic sentiment and cliché, as in his debunking of boundaries at large. To the same extent, we recognise in his memorable Huizinga lecture, The Chair of Decency (Leiden,1981), an appeal for our native biological principles of good to be preserved against the polluting tide of culture. Franciszka’s realisation of Jarry’s salutory monster UBU ROI, on the printed page, in the theatre and in her painting, advances essentially the same moral cause.

The exhibition precedes a special day of presentations and events dedicated to Franciszka and Stefan Themerson.