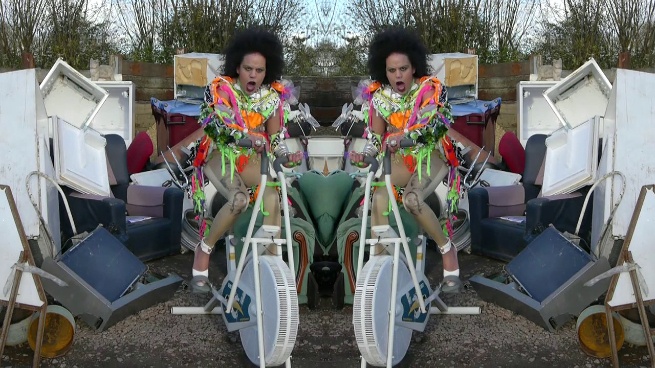 This one-day event, organised by Alexandra Kokoli and Catherine Dormor, invites a collective exploration of the role of gender and sexual identifications in contemporary art practices. Identity, identification and dis-identification are approached as evolving concepts and embodied practices, foregrounding the indivisibility of body and mind, the material and the virtual.

Our aim is to trace intersectional transformations within the arts, spanning feminism, psychoanalysis, queer theory and countercultures. In evoking both identity politics and disidentification (as developed in the work of Eve Kosofsky Sedgwick and José Esteban Muñoz), the conference aims to foster a discussion that tactically traverses feminist and queer politics and practices, questioning their assumed division.

Taking gender critical thought, activism and creative practices as starting points, the symposium will showcase contributions from artists, curators, and writers from either theoretical or practice-led perspectives.

Ashery will be showing and discussing elements from the works Can I Join you Just This Once, 2007, Hairoism, 2011 and How to Kill a Pig 20123/15, looking at the biopolitical, gendered, toxic, eccentric, trashy animal.

Sutapa Biswas was born in Santinikethan, India and is based in London, UK. She studied at Leeds University, Slade School of Art and Royal College of Art, UK. Possessing stark but poetic resonances in which the tensions and complexities of racial and gendered power relations that emerge from trade routes and colonial histories are explored, Biswas’s works draw from combinations of art historical, literary and mythological sources.

Biswas’s paper addresses (in brief) some of the ways in which questions of time, history, gender and race have become ‘material’ within the context of her artwork and in particular, how the aesthetic and formal have been critical to exploring identity in relation to the subjective space.

Jennifer Allen aka Quilla Constance graduated from The Ruskin School of Art, St John's College, University of Oxford with a BA in Fine Art and Goldsmiths College, London with an MFA.

Quilla Constance, 'QC', is the creation of artist Jennifer Allen. QC over-identifies with an ‘exotic’ militant punk persona to interrogate a category-driven capitalist network. QC stages and virally inserts her artistic practice within pop culture, traversing music venues, forging protests and entering art galleries in order to emulate and interrupt the operations of these cultural zones.

Fran Cottell has been practicing as an artist since the 70s, primarily working with live installation, performance and documentation.

Cottell’s contribution will focus on the house projects (ongoing since 2001): a series of live installations by Cottell in her house at 18 Woolwich Road, Greenwich, London SE10 0JU as offsite projects for CGPlondon and UAL; starting by identifying with support services/workers, shifting from social concerns with relative values of order/disorder and the relative power of the visitor and the inhabitants, the impossibility/possibility of collecting ‘liveness’, to an exploration of the potential of psychological space.

Freddie Robins is an artist and Senior Tutor in Textiles at the Royal College of Art, London.

"Knitting is my way of interpreting, communicating and coming to terms with, the world that I inhabit. It sits between me, and my internal world, and the physical world around me, like some form of knitted comfort or rather discomfort blanket. My knitting practice questions conformity and notions of normality. I use knitting to explore pertinent contemporary issues of the domestic, gender and the human condition. My work subverts these preconceptions and disrupts the notion of the medium being passive and benign."

"My work has evolved in a journey outwards from the body. I made pieces to be worn next to the body, to be handled and changed by the handling. Later work has explored outer extents of the body as seen through light, shadows and reflections.  I am concerned with boundaries of an individual; between inside and outside, public and private, this includes a sense of territory and personal space, presence and absence and the creation of a balance between substance and image."

Diana Policarpo (1986, Portugal), is a Visual Artist based in London and Lisbon and completed an MFA in Fine Art from Goldsmiths College, University of London. She investigates questions of power relations and popular culture, juxtaposing the rhythmic structuring of sound as tactile material within the social construction of esoteric ideology. She creates performances and installations to examine experiences of vulnerability and empowerment associated with acts of exposing oneself to the capitalist world.

Policarpo will play a sound piece, to prioritise collective listening and exploring notions of multi-vocality, rhythm, noise and narrative, both as material and inspiration.

Astrid Korporaal is Associate Curator at the ICA and co-founder of Almanac Projects in London and Turin. She is currently studying for a PhD in Visual Cultures at Goldsmiths.

Korporaal will speak about the works in the current ICA exhibition, Looks, in relation to the theme of gender and materiality, as well as the unity of the body in the contemporary digital age.

Jenny Moore is a Canadian artist and musician based in London. She makes live events, and installations where sculpture and performance meet, using music and comedy as way of exploring the now of political concerns and failures

Moore will present a portion of a radio show she is currently working on called You can't win them all, ladies and gentlemen which deals with social and sonic attempts at striking a balance between precarity and impact; agitation and solidarity; the personal and political. It's a travelling radio show in 4 parts that is always made in front of a live studio audience and uses the four 'hot' words: Happiness, Expectations, Misunderstandings and Quality. For this symposium, a re-worked excerpt of speech and sound will be performed live.