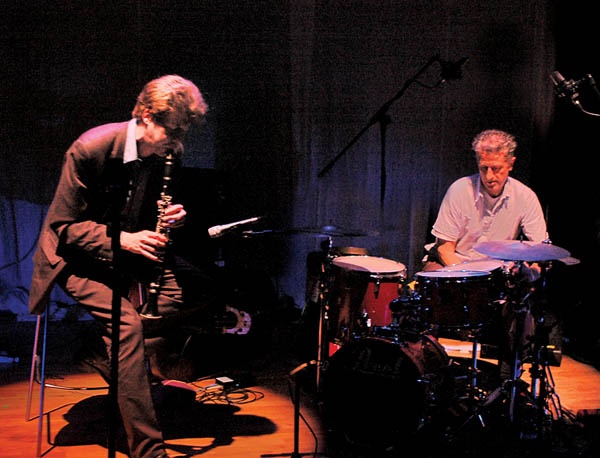 This event is centred around the improvised and collaborative practice of seminal drummers and musicians Eddie Prévost, Seb Rochford and Steve Noble. Three distinct performances will take place with roots in experimental jazz and free improvisation, beginning with the groupwork of Prevost's 9! ensemble in the ICA Gallery, and then continuing in the Theatre space with performances that include theremin maestro Pamelia Kurstin.

9! Drummer Eddie Prévost cofounded the experimental music improvisation ensemble AMM in 1965; the group were pioneers of free improvisation, consciously aiming to play outside of existing musical structures. Since 1999 Prévost has convened weekly improvisation workshops which attract a huge range of international players. 9! sprang out of these workshops; a group of nine musicians with a diverse approach to instrumentation and electronics. Tonight’s players are Paul Abbott on electronics, Jamie Coleman on trumpet, Ute Kanngiesser on cello, Grundik Kasyansky on electronics, Ross Lambert on guitar, Sebastian Lexer on piano and computer, Eddie Prévost on percussion, Guiaumme Viltard on double bass and Seymour Wright on alto saxophone.

Seb Rochford is an amazing young jazz and improv drummer who is involved in seemingly infinite projects and collaborations, including his own groups Polar Bear, Acoustic Ladyland and Fulborn Teversham, and regular performances alongside Leafcutter John and the F-IRE Collective. Tonight he collaborates with world-renowned theremin player Pamelia Kurstin, who has played with David Byrne, Sebastien Tellier and John Zorn.

Steve Noble and Alex Ward are key members of the British free improvisation scene, first playing together at Derek Bailey's Company Weeks festivals in the late 80s. A celebrated drummer, Noble recently co-founded the trio N.E.W. alongside Ward with performances verging on hardcore punk and metal. Ward plays clarinet and guitar, and has worked in various collaborative groups, including Gannets, and with artists such as Luke Barlow and Simon Fell. Noble first began collaborating with Ward when Alex was 13 years old and their understanding of each others musical talents has produced one of the most enduring relationships on the free improvisation scene.

This event is featured as part of the London Jazz Festival 2009.

Seb Rochford will also feature in the Calling Out Of Context recording studio earlier during the day of this event.