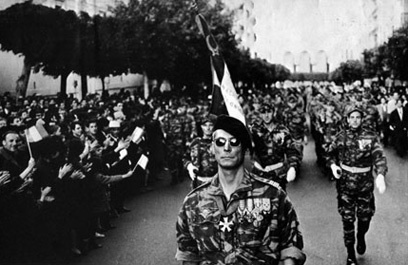 Special Preview: The Battle of Algiers

This screening will be followed by a discussion with the producer of and actor in The Battle of Algiers Saadi Yacef, in conversation with Professor David Forgacs (Professor of Italian, University College London).

Director Gilles Pontecorvo's classic political-thriller gets more important with each passing year, providing as it does fascinating insight into terrorism, guerrilla warfare and state control. An urgent recounting of the war between French colonial forces and Algerian rebels, the film is a masterpiece of vivid you-are-there action and compelling procedural detail, with its drama-documentary style - using newsreel and non-professional actors - remaining a strong influence on contemporary filmmakers. A memorable score by Pontecorvo and Ennio Morricone really brings the film to emotional life.

Competition
We have 3 pairs of tickets to give away for this event. To enter the competition please email info@ica.org.uk with the answer to the following question in the subject title: In what year was Battle of Algiers originally released?
This competition closes at 12pm on Friday 4 May . Winners will be notified by email by 2pm that day.