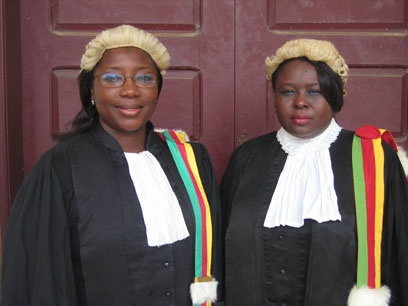 An uplifting and enlightening film from documentary makers Kim Longinotto and Florence Ayisi. Justice in the Muslim village of Kumba Town, Cameroon, is overseen by the progressive female partnership of prosecutor Vera Ngassa and court president Beatrice Ntuba, who together help women to speak out and fight back against assumptions of patriarchal privilege in modern-day Africa.

Longinotto and Ayisi take us through cases that demonstrate how Ngassa and Ntuba dispense justice in ways that will affect positive change not only in their community but also potentially throughout the country at large. A young girl who has been raped, a 6-year-old who has beaten with a coat-hanger and a wife seeking divorce from her abusive husband are all given the sort of support - both legally and emotionally - that extends beyond legal advice and becomes a crucial act of empowerment.

This is a warm, witty and involving portrait of two remarkable characters and an example of grassroots action at its most effective, Sisters In Law is that rare thing - a film that makes you believe things might actually get better rather than worse.