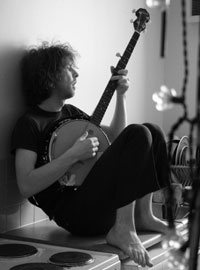 Born in Cork Ireland Simple Kid (a.k.a Ciaran Mc Feely) has spent a large proportion of his life in a band and jet setting across the globe. However after leaving his first band a having brief hiatus in California Simple Kid is back and is quickly becoming a cooler than ice cold artist that loves what he does and happens to fortunately be brilliant at it as well. His latest album prompted the NME to describe him as 'the post-modern Bob Dylan', which is a huge accolade to bestow on someone who did a duet with Kermit the Frog at this years Green Man Festival. Not only has he delighted audiences all over England, but his satirical lyrics blended with a very warm understanding of human nature means that he is charming his way into the American charts as well.