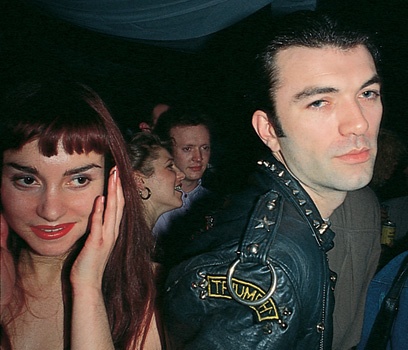 A disquieting, playful, and intensely urban exhibition rooted in the political landscape of the 1980s, The Secret Public examines the dark flowering of creativity which took shape in the UK between 1978 and 1988. From Leigh Bowery's five-night performance, filmed through the one-way glass of a London gallery window, to Jon Savage's photographs of neglected corners of London and Richard Hamilton's Treatment Room (1982) in which Margaret Thatcher's televised image hangs ominously over an operating table, this exhibition offers a re-evaluation of Britain's recent political past, highlighting the subversive tendencies and lasting influence of a group of artists working across art, fashion, film, dance, performance, video and music.

A time of heightened political, economic and social change—from the recession and civil unrest of Thatcherite Britain, to the advent of AIDS—the late 1970s and 1980s saw a creative energy emerge in the UK with its own particular and potent shape: a covert form that sat outside established institutional practices of the time, creating its own network of activities, events, economies and celebrities. As a generational grouping of artists and personalities, it is perfectly described by the title of a fanzine created by Linder and Jon Savage and published in Manchester in 1978: The Secret Public.

Just as the punk movement of earlier years represented a volatile, ambiguous celebration of violence, negativity and protest, the artists gathered together in this show responded to a darkening view of the world. Finding resonances in the area of performance, but also drawing on film, video, fashion and music, these artists fused a range of contemporary and historical reference, creating works exploring gender, and sexuality, and the use of the body as both spectacle and a metaphor for the social 'body'. Arguably, the period can be seen as a last outburst of radical experimentation before the onslaught of consumerism established an environment in which 'alternative' culture could immediately be co-opted into the mainstream.

By focussing on the years between the death of punk and the birth of the YBA phenomenon, The Secret Public invites a consideration of the UK's current artistic and cultural landscape in relation to these landmarks, directing attention to the connections between art and politics and to the aesthetics of club and pop culture, which figured so largely during this period and which continue to influence a wide range of artistic practices.

Do you remember the Neo Naturists? Did you ever see them perform? Do you have any pictures or stories? They'd love to hear from you at theneonaturists@gmail.com

The Secret Public: The Last Days of the British Underground 1978 - 1988 is conceived and produced by Kunstverein München, and curated by Stefan Kalmár and Michael Bracewell