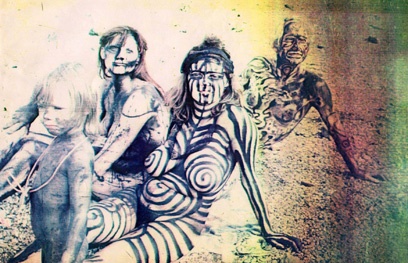 A discussion between David Dawson, Christine Binnie of the Neo-Naturists and filmmaker Akiko Hada, chaired by the writer Ken Hollings, with a screening of the previously un-exhibited pop video Pistol In My Pocket, featuring Leigh Bowery.

David Dawson organized the 'Anti-Art Fair' in Camden in the mid 1980s, having previously run the influential B2 Gallery. David has worked collaboratively with many of the artists featured in the exhibition, including the Neo-Naturists, Trojan, Cerith Wyn Evans and John Maybury, and has an intimate knowledge of this particular era of the London underground arts scene.

Christine Binnie is a co-founder of the Neo-Naturist group whose work features in The Secret Public. The group had the structure of an open network and performances during the 1980s were presented not only in galleries but in night clubs, cabarets and public spaces.

Akiko Hada was born in Japan and started making videos in 1982 in London, and is well known for her films and collaborative projects of this era. One of the main areas of her work has been audio-visual collaborations with various musicians experimenting with the synthesis of sound and image.

Ken Hollings is a writer based in London. His work draws freely upon trash culture, weird science, political intrigue and strange connections to reconfigure reality and demolish common assumptions. His writing has appeared in The Wire, Sight & Sound, Strange Attractor and Frieze.