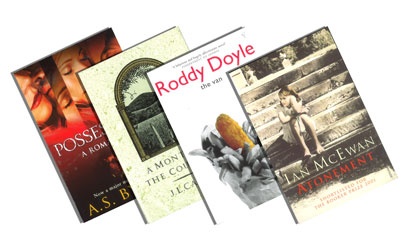 The Booker at the Movies

The Booker Prize is the most celebrated literary prize in the UK and in the English speaking world. In total, 39 winning and shortlisted Booker books have been made into films or are currently in production, but does a good book necessarily make a good film, or is something inevitably lost in translation?

Every Sunday afternoon in June we're screening a film adapted from a novel, followed by Q&A and discussions with some of those involved with the film. Booker at the Movies marks the ICA's 60th year and the Man Booker's 40th, and funds raised will go into our cinematICA account to help refurbish the ICA Cinemas.

More than just a run of films, The Booker at the Movies is a platform for debate around the translation of books to film. It is an opportunity for authors to talk about the experience of seeing their work made into film and for screenwriters to discuss the process and challenges they faced. Writers, screenwriters and journalists including AS Byatt, Roddy Doyle, Simon Gray, Deborah Moggach and Christopher Hampton discuss the fascinating but complex process of turning winning words into winning cinema in panel discussions and Q&As as part of this illuminating season.

To celebrate the 40th anniversary of The Booker Prize, Pat Barker, Peter Carey, JM Coetzee, JG Farrell, Nadine Gordimer and Salman Rushdie are all in the running to win a one-off award, The Best of the Booker. To make your vote count, visit the official Man Booker website before 8 July 2008 and choose the title you think deserves the award.