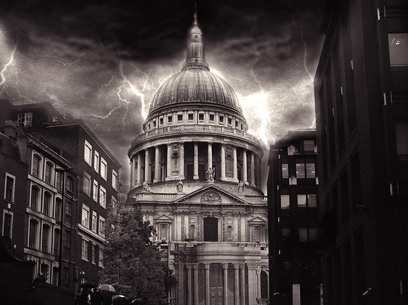 Elliot Payne and Ellen Page will be talking about their individual works in the exhibition Saving Planet Earth: A 21st Century Approach, and discussing their interest in changes in human society as the main reason for concern in arguments about environmentalism. Without human reference and sentiment global warming is just another change that the world and nature will endure but we may not.

Ellen Page will be talking about her short film The Great Flood of London, created as her final submission for the Diploma in Architecture course. The film is the outcome of nine months research and examines how London might survive the Great Flood of 2030, starting with the assumption that London is overcome by the catastrophic meltdown of Greenland over a thirty-six year period. Ellen will be talking about the research behind the film, undertaken while part of Unit 14, The Interactive Architecture Workshop. She will start with a brief introduction to 'Bbckcasting', a method of future planning that starts with a 'desirable future' and works backwards to create a narrative path from the present.

Elliot graduated from the Bartlett School of Architecture in the summer of 2007 and is currently in employment with architects, Smith Caradoc Hodgkins, based in Soho. Elliot continues to develop his personal interests in holistic design, challenging sustainable design financially and socially as concerns inextricable from our understanding of how architects promote sustainable built environments.

Ellen is an architectural designer and short film-maker. She studied architecture at the Bartlett School of Architecture, UCL.