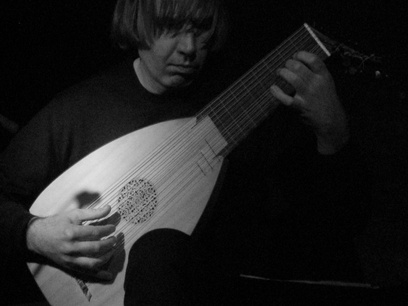 Roots and Shoots takes an untrodden path into the exploratory territories of New York-based Dutch artist Jozef van Wissem, a virtuoso composer and musician, whose instrument of choice is the Renaissance lute. "Visceral string buzz and finger squeals that develop a tableau of complexity until the melody takes on a mournful elegance," says The Wire.

Also up are Nalle, a Glasgow-based psych-folk trio whose songs are built around unbridled vocals and guitar playing, with occasional sojourns on recorder and Finnish kantele, alongside bouzouki, clarinet and viola. Their music borrows from a wide world of musical traditions, weaving instrumental tapestries around hypnotic, almost ballad-like vocal narratives. Nalle's Chris Hladowski also presents The Family Elan - a devotional three-person side project built around vocal and bouzouki and drawing on the rich and varied traditions of Greek Rebetes, mystical tanbur and saz masters of the Near East.

Roots and Shoots' Emma Petit and Nick Luscombe will DJ.