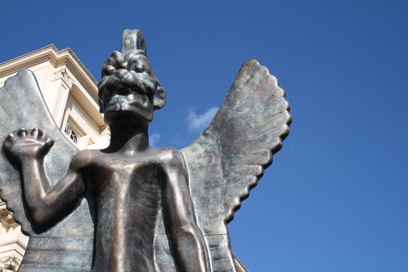 Šuillakku is an immersive, hugely evocative sound installation filling our lower gallery. Italian artist Roberto Cuoghi undertook an imaginative journey back to Mesopotamia in the seventh century BC, when the Assyrian empire was falling into ruin and the city of Ninevah (the site of which is in modern-day Iraq) was ransacked by its enemies. Inspired by Assyrian lamentations to their gods, this intense aural landscape gives the visitor the impression of being surrounded by hundreds of people at a time of great suffering.

To create Šuillakku, Cuoghi spent two years immersed in the language and rituals of the Assyrians. The soundtrack he composed draws on this research and is enriched by his imagination. The work employs a huge range of musical instruments, many of which were recreated especially for the piece. Of equal importance to Šuillakku is its vocal aspect: a vast chorus which Cuoghi created by multiplying and mutating his own voice into an extraordinarily potent, cacophonous assault.

In the process of his research Cuoghi frequently came across the demon Pazuzu, a metamorphic being with the head of a dog, the horns of an antelope and the tail of a scorpion. Pazuzu was one of the most feared spirits in the Assyrian pantheon, and images of him were used as charms, placed at entrances and gateways to drive away lesser spirits. The final element in the exhibition is an image of this demon, looking out over The Mall. Ironic and disturbing, Cuoghi’s invocation of a civilisation in crisis operating under a fearful irrationality offers a new perspective on our own moment in history.

Cuoghi has worked with a wide range of techniques including photography, video, animation, painting, drawing and sound. He is famous for his acts of transformation and at the age of 25 he embarked on a seven year process in which he took on the image of his father, including wearing his father’s clothes, turning his hair grey and gaining more than 50 pounds.

The exhibition is curated by Marcella Beccaria and organised by Castello di Rivoli, Museum of Contemporary Art, Rivoli-Turin.