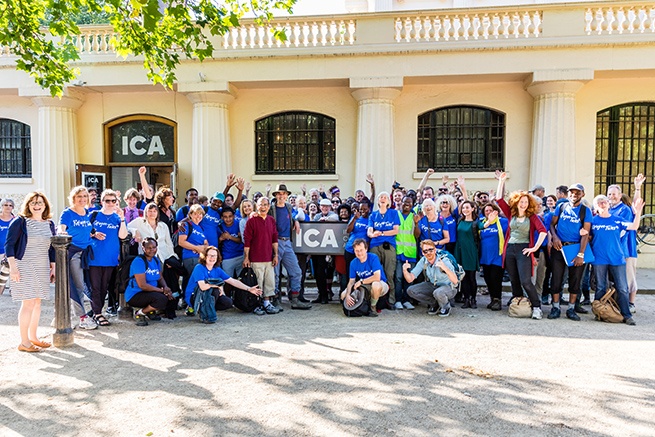 In June 2015 the Refugee Tales project walked in solidarity with refugees, asylum seekers and immigration detainees, from Dover to Crawley along the North Downs Way. As the project walked it reclaimed the landscape of South East England for the language of welcome, gathering and communicating experiences of migration to show, in particular, what indefinite detention means. In 2016 the participants and organisers walked again, this time celebrating their historic act of solidarity at the ICA.

In 2017, following a walk from Runnymede to Westminster, Refugee Tales walkers arrive at the ICA calling for an end to indefinite immigration detention in the UK. At every stop of the way leading writers will help tell the tales of asylum seekers, refugees and detainees, as well as the stories of those who work with them.

Hosted by Hugh Muir, and with music from jazz singer Ian Shaw, the ICA line-up includes poet David Herd and a screening of Sarah Wood’s short film Azure, featuring novelist Ali Smith. Olivia Laing will read The Abandoned Person’s Tale and Abdulrazak Gurnah will read The Arriver’s Tale, both retellings of the stories of individuals who have direct experience of Britain’s policy of indefinite immigration detention.

This event marks the publication of Refugee Tales Part Two by Comma Press, which will be available in the ICA Bookshop.

Refugee Tales is an outreach project of the charity Gatwick Detainees Welfare Group.