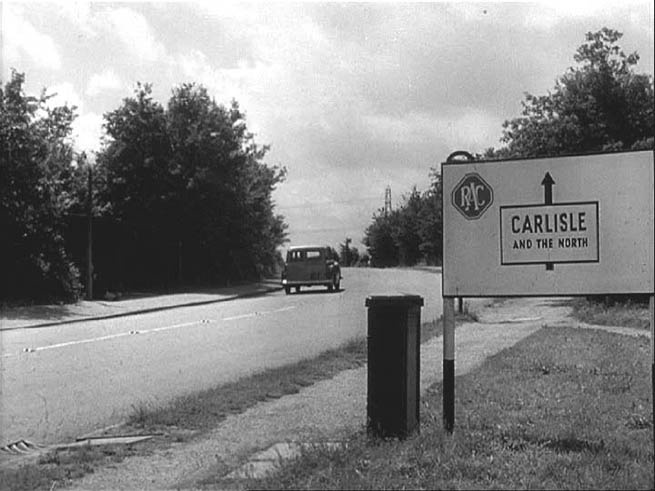 The British science fiction film Quatermass 2 (Hammer Film Productions, 1957) holds a particular significance for the fictional protagonist of three of Patrick Keiller's films, whose exploits also featured in the recent exhibition The Robinson Institute (Tate Britain, 2012) in which Quatermass 2 was displayed.

A detail of the film (the feature-length adaptation of Nigel Kneale's 1955 six-part BBC television serial) appears to connote Professor Quatermass's moon rocket base with the Spadeadam Rocket Establishment, built in the late 1950s to test rocket motors for Blue Streak, the UK's medium-range ballistic missile. In the Robinson imagination, Blue Streak's subsequent cancellation and replacement with the US-produced Polaris figure as a crucial ‘moment' in the UK's post-WW2 history, the repercussions of which continue today, while Quatermass 2's encounter with an invading malevolent intelligence appears to offer both an explanation for the UK's descent into neoliberalism as well as, perhaps, some hope for an eventual recovery.

Join Patrick Keiller and Mark Fisher for a screening of Quatermass 2 followed by a discussion prompted by the film and by the histories explored in Keiller's films and in The View From the Train: Cities and Other Landscapes, Keiller's first collection of essays published by Verso Books (November 2013).

Read Patrick Keiller on Quatermass II on the ICA Blog →

Patrick Keiller's films include the celebrated London (1994), Robinson in Space (1997), The Dilapidated Dwelling (2000), and Robinson in Ruins (2010); other works include the installations Londres, Bombay (Le Fresnoy, Tourcoing, 2006) and The Robinson Institute (Tate Britain, London, 2012), the latter accompanied by a book The Possibility of Life's Survival on the Planet. Formerly a research fellow at the Royal College of Art (2002-11), he has taught in schools of art and architecture since 1974.

Mark Fisher is the author of the influential Capitalist Realism (Zer0, 2009) and the forthcoming Ghosts of my Life: Writings on Depression, Hauntology and Lost Futures (Zer0, 2013). Since 2004, he has written the celebrated blog k-punk and is a regular contributor to publications including Frieze, The Wire and Film Quarterly. He lectures in Aural and Visual Cultures at Goldsmiths and is a Commissioning Editor for Zer0 books.