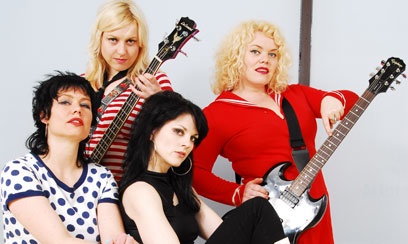 The Priscillas + Bolt Action Five + Daughters of the Kaos DJs

Named after The King and formed two years ago, The Priscillas' Jenny Drag (singing), Guri Go-Go (axe), Kate Kannibal (the bass), Hege Hotpants (the drums) have released an album on the mighty Damaged Goods label, home to Holly Golightly, The Headcoatees, and Billy Childish. Not only do they distinguish themselves by their look and glam-punk-pop-rock sound, but also by their sheer instrumental competence and commitment to putting on a show. Support includes Bolt Action Five, who are four humans and one drum machine who are fantastic at both rocking out and dancing; social zeitgeist? Maybe. Excuse to party? Heck, yeah! Club Motherfucker residents Daughters Of The Kaos hit the decks with their mix of electro punk anthems.