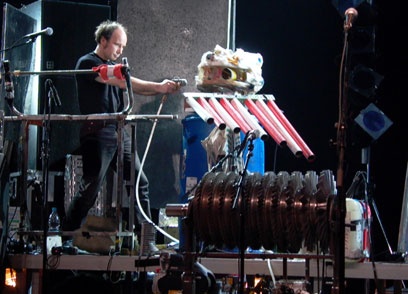 The Palast der Republik (Palace of the Republic) was the site of the East German parliament between 1976 and 1989 as well as housing auditoriums, art galleries, restaurants and a bowling alley. Abandoned during the 1990s when asbestos contamination was discovered, demolition of the building began in February 2006

In November 2004 Einstürzende Neubauten used the skeleton of the ruined Palast as a location for their architectural-musical fantasies. Accompanied by a 100 strong choir, recruited from www.neubauten.org, they played in and with the building in their, almost literally, building collapsing style.

There will be a Q&A after the screening with Einstürzende Neubauten founder member and former Bad Seed Blixa Bargeld.

The DVD will be available to buy in the ICA bookshop.