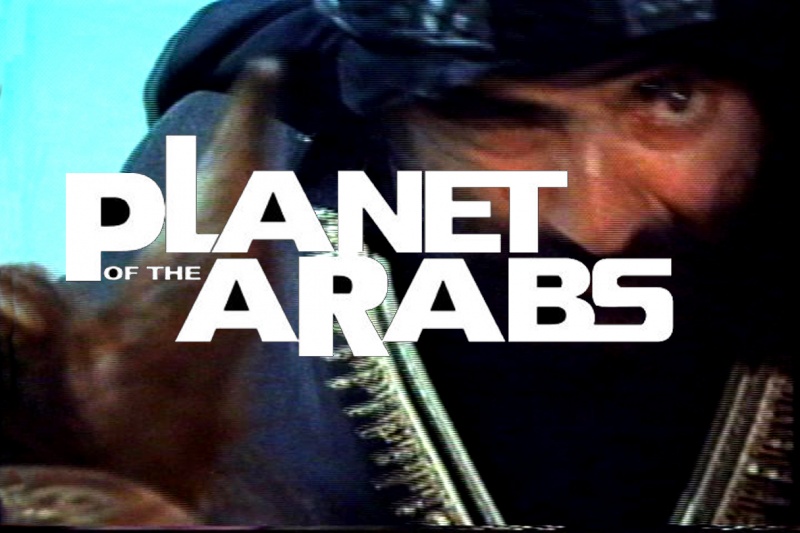 This screening explores how video artists have used and appropriated pop culture media, reworking and transforming material from TV, advertising and news to challenge its initial meaning. Each of these works comment on, deconstruct and often critique mass media narratives and traditional social structures.

By subverting the original source, these artists confront the viewer to the construction of cultural archetype using a medium they are themselves attacking.

Planet of the Arabs by Jacqueline Reem Salloum (10 min)

Planet of the Arabs is an experimental short on Hollywood’s negative depiction of Arabs and Muslims through the decades. Inspired by Dr. Jack Shaheen’s book “Reel Bad Arabs”, Planet of the Arabs was an official selection at the Sundance Film Festival. It won the “Best Editing” award at the Cinematexas Film Festival and continues to be screened at exhibitions and used in seminars as an educational tool to depict stereotypes in the media.

Mutiny employs a panoply of expression, gesture, and repeated movement. Its central images are of women: at home, on the street, at the workplace, at school, talking, singing, jumping on trampolines, playing the violin. The syntax of the film reflects the possibilities and limitations of speech, while “politically, physically, and realistically” flirting with the language of opposition.

A programme of video art collected from this highly influential genre, which flourished in the UK in the mid-1990s. Scratch video made use of found images from film and television, cutting seemingly incongruous imagery together to make a new meaning - humorous, political and hard-hitting by turn. The new aesthetic was compared to the record-scratching techniques of hip hop, hence the name.

Explosive bursts of fire open Technology/Transformation, an incendiary deconstruction of the ideology embedded in television form and pop cultural iconography. Appropriating imagery from the 1970s TV series Wonder Woman, Birnbaum isolates and repeats the moment of the "real" woman's symbolic transformation into super-hero. Entrapped in her magical metamorphosis by Birnbaum's stuttering edits, Wonder Woman spins dizzily like a music-box doll. Through radical manipulation of this female Pop icon, she subverts its meaning within the television text. Arresting the flow of images through fragmentation and repetition, Birnbaum condenses the comic-book narrative — Wonder Woman deflects bullets off her bracelets, "cuts" her throat in a hall of mirrors — distilling its essence to allow the subtext to emerge. In a further textual deconstruction, she spells out the words to the song Wonder Woman in Discoland on the screen. The lyrics' double entendres ("Get us out from under... Wonder Woman") reveal the sexual source of the superwoman's supposed empowerment: "Shake thy Wonder Maker." Writing about the "stutter-step progression of 'extended moments' of transformation from Wonder Woman," Birnbaum states, "The abbreviated narrative — running, spinning, saving a man — allows the underlying theme to surface: psychological transformation versus television product. Real becomes Wonder in order to "do good" (be moral) in an (a) or (im)moral society."