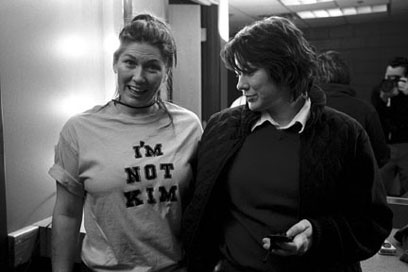 "It is film where simmering tensions erupt into primal storms, where high tragedy goes cheek-by-jowl with low comedy, and where the drummer goes mad and won't finish his solo." The Guardian

In the history of modern American music there were few bands like the Pixies. An unparalleled musical path was charted, influencing countless others despite modest financial success. Then in 1992, just as it seemed the band were poised for fame. their chief songwriter and vocalist Black Francis announced his intention to quit the band via a blunt facsimile. That it seemed, was that. Suddenly after a 12 year gap in 2004, the Pixies reunited and announced a series of shows that would become some of the fastest selling in music history.loudQUIETloud is the story of this unforeseen plot twist - a deeply compelling portrait of four band members and their difficult, tense and ultimately triumphant return.

Pixies' fans get fly on the wall insight into Charles, Kim, Joey & David's relationships with each other, with their families and with their audience. The Pixies as they are today are brought sharply into focus alongside striking concert footage. From the loud emotional highs of performing to renewed simmering tensions between personnel in quieter moments, the Pixies legacy is laid bare.

Having premiered in Europe at the Edinburgh film festival to great acclaim, loudQUIETloud is now specially screened in the ICA theatre allowing the full impact of the film's live performances to be felt. Big screen, big PA, sit down with your drink, just as you would a live show with fantastic footage of the seminal Where Is My Mind, Gouge Away, Hey and many more. Plus director Steven Cantor will be on hand to answer the many searching questions that the film prompts. There will also be giveaways, special guests and Pixies' themed DJing in the ICA bar.

More info at www.plexi.co.uk, and world cinema screenings at www.loudquietloud.com.