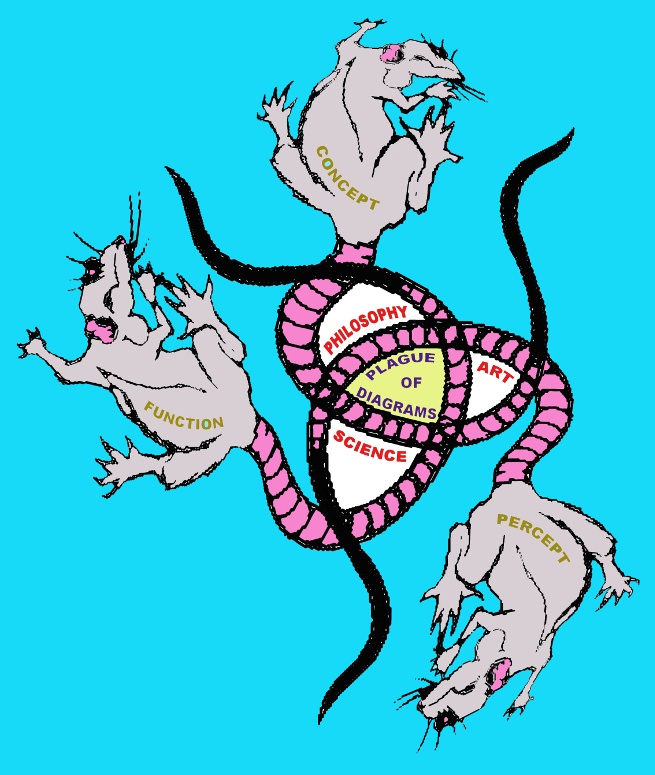 "The plague is met by order; its function is to sort out every possible confusion." Michel Foucault, Discipline & Punish

Plague of Diagrams is an exhibition and a programme of performances, talks and discussions concerning the relationships between diagrammatic practices and thought in different disciplines. In particular, the event explores the function and use of diagrams in art as expanded diagrammatic practice beyond the graphic presentation of information.

Plague of Diagrams at the ICA

The event explores diagrams as actual/virtual machines that while taking material form and indexing existing relations and objects, point to other arrangements. As Gilles Châtelet declared, diagrams are gestures that invite other gestures. This is a vision of diagrams as abstract machines activated through performance or thought; a notion of diagrams as relays that connect or traverse different times and spaces. It is a conception of diagrams as critical and logical exploratory devices that, in presenting what is not apparent or visible—real abstractions, potential modes of being, hidden relations—paradoxically depend on the register of the imaginary and the inventive production of images, figures and gestures.

Since the Enlightenment, when diagrams facilitated scientific and statistical breakthroughs, to cybernetic research of the twentieth century, to the algorithmic devices that govern relations and economies today, diagrams have extended and organised human culture. While diagrams have proliferated we can draw a distinction between diagrams that index and deliver knowledge, and diagrams that pose problems and facilitate thought as an exploratory process. Plague of Diagrams addresses not just the critical and organisational functions of diagrams but the art of diagramming too, while taking account of the reductive, controlling or ideological use of diagrams.

Plague of Diagrams is organised by David Burrows and Dean Kenning in collaboration with Ami Clarke, Andrew Conio, John Cussans and David Osbaldeston. The collaboration has developed out of discussions and events staged by the Diagram Research Use and Generation Group (DRUGG).

Please note this is an exhibition and entry is with Day Membership. The events listed below will take place within the exhibition space at the times stated below. Audience members are free to come and go during these times, however capacity is limited so please arrive on time for events.

Due to popular demand the symposium has been made bookable. Learn more.

In the Pull of Time draws on writing in the Error-Correction: an introduction to future diagrams series - scripts that reference and include found and appropriated texts, contemporary commentary; news items, as well as anecdotal evidence, culminating in an interrelated convergence of many interwoven threads. The texts consider diagrams and diagramming as a way of considering the way differing frameworks have historically constructed the notion of subjectivity, from single point and perspectival drawing, to projected geometry and further beyond the human sensorium, via abstraction in mathematics and quantum physics that problematise previously held classic mechanical models of representation, siting an object in space.

A performance based on a text by Gregory Bateson. Starting with the outline of Bateson's argument, we will proceed to question what might be made clear and what might escape the outline by re-examining the text and performing it in the shape of a four-piece band.

A re-staging of a dream about an art school seminar based on a floor-drawn a diagram that traced continuities between the historical European avant-gardes of the 1920s and 30s and the international counter-cultural movements of the 1960s that was extrapolated upon by the reputable art theorist Jonathan J J Charlesman, before a troubling Xeno-feminist intervention by an un-identified female artist.

8.50 – 9.20 Plastique Fantastique, Loops for AI Machines to Tell their Children

(English Heretic will draw on two key releases from its catalogue: Tales of the New Isis Lodge and A Study of Lunar Research Flights.)

The first part of the performance attempts to reconstruct the curious interplay of a form of Chinese Black Magic known as Ku with the pulp fictions of Sax Rohmer. Ku is Hexagram 18 in the I-Ching and the glyph has been studied along with a report by Feng and Shyrock as some kind of monad representing a form of poison magic, and in essence as a moral warning against corruption and decay.

The second part of the performance explores the notion of diagrams of sacrifice. English Heretic's latest release attempts to create a documentary of speculative archaeology in which an abandoned missile base on the Suffolk coast was reimagined to its primal ritual origins - a place of sacrifice akin to the bloody ball courts of Mesoamerica and the tophet of Carthage. Much of the incidental music for this documentary was constructed on site and modulated in the studio using aerial maps of these locations. English Heretic will present a new cut of this documentary.

John Cussans, Ami Clarke, David Burrows and Dean Kenning will each draw or otherwise present and discuss a diagram. Starting from these diagrams, which cover zombies in culture, probability theory, cybernetics, psychoanalysis, individuation and political economy, we will over the course of the day attempt to map out the ‘capitalist subject’.

This workshop is open to all and people are welcome to bring their own diagrams to draw as part of a collaborative exercise in diagrammatic thinking and problem posing/solving. Chalk is provided.

David Burrows, Discourse of the Capitalist

Ami Clarke, Error-correction: an introduction to future diagrams: “the sum of all errors due of orientation due to rollings of the eye shall be as minimal as possible”’.

Looking at how ideas relating to the theory of probability lead to how users of diagrams, unlike viewers, are functional components inseparable from the system in which they are imbricated, and Karen Barad's ‘agential realism’.

In partnership with and with the generous support of