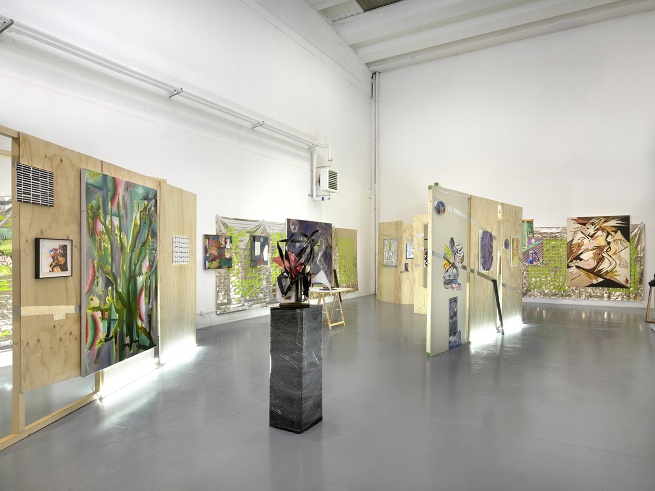 Coinciding with the exhibition of Isa Genzken’s Basic Research Paintings, this event will feature a panel of artists presenting and discussing new approaches to making paintings within their practices.

In their presentation, Cullinan Richards will refer to the STAG exhibition, which they co-curated with Katrin Plavcak and Andrea Sassi, and presented at Dispari&Dispari in Italy, December 2013. This show proposed an active, gestural approach to making and exhibiting paintings – an expression of painting as an implicated position rather than a separated object.

Here, individual works were positioned so that the experience of the exhibition itself became embroiled in the stuff and matter of paint. The artists in the panel will expand upon this starting point through their own practice and research.

Cullinan Richards is a collaboration between Jeanine Richards and Charlotte Cullinan. Their research interests are concerned with Painting/Sculpture as performance-event, as well as the exhibition as material. Their investigation of the status of the artwork within this context, as both object and support structure, also incorporates the notion of 'collapse' as in the collapse of the figurative narrative through abstraction – and collapse of the traditional intention behind the creation of individual artworks.

Since Cullinan and Richards have chosen to work within a tight partnership that facilitates engagement with a wider set of conceptual frameworks, painting has become central to their art-making. Recent solo exhibitions reflect this including Girl Rider and Strippers (2008), Positions: The Primitives [Parts 1 and 2] (2009), Collapse Version V (2010) and The British Art Show 7 (2010-11).

Andrew Bick is an artist and curator. Since 2008 he has been developing projects based on research in to British Construction and Systems Art from the 1950’s to 1970’s, initiated as a result of a Henry Moore Institute Fellowship in 2007/08, and has now reached a point in his practice where he considers these projects as conversations. Bick has also made commissions in collaboration with architects such as Lifshutz Davidson Sandilands and John McAslan + Partners and is currently working on a project for central London with MAKE Architects. Andrew will present on the ambivalent relationship of contemporary art to late modernism and how the idea of conversation in exhibition form generates new modes of practice.

His painting is currently in Now-Ism: Abstraction Today at the Pizzuti Collection, Cleveland, Ohio and in 2014 he co-curated Conversations around Marlow Moss with Katrina Blannin at &Model Gallery Leeds, where he also gave a paper at Leeds Art Gallery on Why Marlow Moss Should have confronted Ben Nicholson.

Alexis Teplin’s practice is routed in abstract painting that extends to include sculpture and performance. Concerned with the visual strategy of painting, Teplin uses art historical references to construct performative installations based in seduction, artificiality and cultural signification. As part of the panel, Alexis will explore the notion of staging.

Milena Dragicevic uses a code of abstraction while trying to keep one foot in reality. She is interested in exploring how to make a painting that is neither object nor story, yet is able to resonate within its own structure. More recently her work has begun to investigate the use of writing/text for lecture/performance as a means to mirror, question, expand and to create networks within her practice. Milena will speak about painting as “disposal zone” and working from a space of amalgamation.

Attend two events from Eloise Hawser's artist talk, the performance Eloise Hawser: Er and other Conductors and the Isa Genzken panel discussion: Staging Painting and get £1 off tickets for each event. Attend all three events and get £2 off tickets.