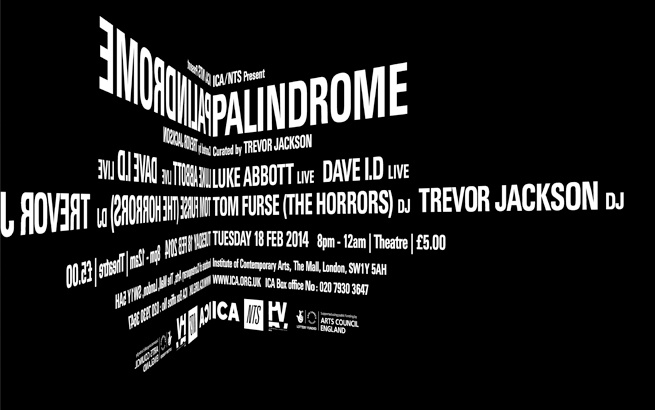 Listen live to Palindrome from 8pm on www.NTSlive.co.uk

The ICA is pleased to announce the first in a series of events co-hosted by NTS Radio, entitled Parallel Visions. For the inaugural event guest curator Trevor Jackson will create within a specially commissioned installation a multi-dimensional experience inspired by Richard Hamilton’s Palindrome (1974). It will be accompanied by music from DJs Trevor Jackson, Tom Furse (The Horrors), and live acts Luke Abbott and Dave I.D.

Due to the limited capacity of the installation please arrive early to guarantee entry.

Experimental online radio platform NTS is the ICA Associate Artist in 2014. Parallel Visions reflects the similarities in the NTS and ICA missions to provide a venue for experimental and contemporary currents in music and performance arts.

Trevor Jackson is a London based Art Director, DJ and Producer. His work blurs the border between vision and sound via print, video, light installations and music - from dark, psychedelic hip-hop, house & techno through to industrial new wave, post punk classics and rarities. Operating under a number of monikers, including The Underdog and Playgroup, Jackson’s carefully crafted releases, remixes and compilations such as DJ Kicks and Metal Dance along with his Output Recordings Label (Home to Four Tet & LCD Soundsystem) have been cited as seminal compendia of experimental EDM.

His artistic and design work, especially in the form of cover designs, has been widely exhibited and reflect his engagement with the dialogue between music and visual representation. In 2007 he showcased a live audio visual performance RGBPM at the BFI IMAX and in 2011 Jackson had his first solo show NOWHERE at the KK gallery in London. These video, photographic & screen printed works explored the innocence of natural light and colour, as well as the power of opposing astrological forces.

NTS Radio is a Dalston, London based independent online radio project that offers 'a platform for inspired people to present their findings, passions, and obsessions'. They work with an array of emerging talent and with those who aim to showcase new music across a range of genres, such as the British independent record label Young Turks. NTS also host live events around London and beyond.