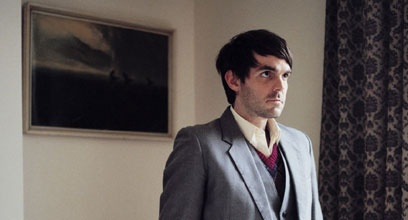 Martin Craft is a songwriter and one-man band who lives in Dalston, London. His 2004 solo debut 'i can see it all tonight' was delicate and eclectic, with sounds ranging from dusty road songs to opium-lounge music. It was also critically acclaimed: dazed and confused called him 'one of the most distinctive voices in songwriting in the 21st century' and the independent said 'we're talking major new talent - you should hear this!'

Since this release M.Craft went underground for a year and a half to record an album that was hampered by a series of disasters including two false starts which blew almost the whole budget and a serious rock'n'roll guitar amp electrocution which made it hard to move for a while... finally though, an album is finished - in the end it was recorded by daniel lea (by the fireside) at golden hum, which was at the time his basement room - drums were set up in the kitchen and banjos in the bathroom and on a diet of hommous and bread the album was slowly, unsurely put together, but it worked, and an album with a unique sound has been created.

It came to a close when it was mastered at Abbey Road and now the album is already turning heads and tipped as one of 2006's most exciting releases. it's sounds range from the dreamy jazztinged 'silver and fire', to the neon-soul of 'you are the music', to the lonely folk 'i got nobody waiting for me'

Martin Craft is an Australian who lives in London, UK. In 1991, at 15, he co-founded classic Australian band sidewinder whose fire burned bright throughout the nineties. Always troubled, they split in 2000 Wanderlust led Martin to london where he has lived ever since.