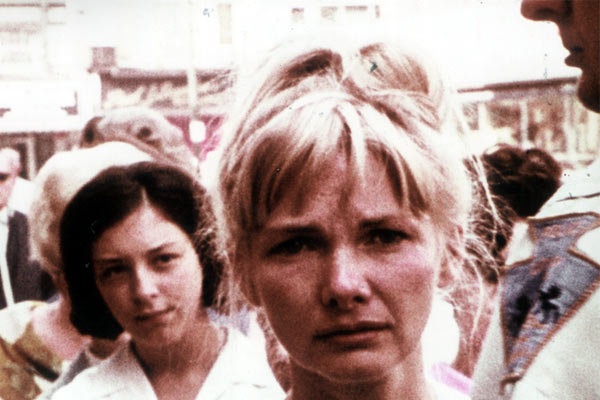 The Machine That Kills Bad People: Cry When It Happens + Wanda

Written and directed by Barbara Loden, Wanda (1970) is a milestone of American independent filmmaking that has seen little distribution since its release. The film stars Loden in the titular role of Wanda Goronski, a woman who leaves her children and abusive husband to embark on a series of unfortunate encounters, ending up as an accomplice to a robber and petty criminal. Shot unflinchingly on 16mm in Pennsylvania coal country, and inspired by a news report of a woman who thanked a judge for sending her to prison, this sometimes brutal and often harrowing portrait was described by its director as 'semi-autobiographical'. A film about women, actresses, landscapes, what drives us to change and what keeps us in place.

Wanda is accompanied by Cry When It Happens/Llora cuando te pase (2010), a 16mm short by Los Angeles-based artist and filmmaker Laida Lertxundi.

Lertxundi's films present us with enigmatic landscapes and inscrutable characters whose relationships to one another are made suspect by her idiosyncratic use of sound and music. Cry When It Happens speaks of loneliness and longing, translating a certain experience of the city of Los Angeles.

Barbara Loden (1932-1980) received the International Critics Award at the Venice Film Festival for Wanda in 1970. Known primarily as an actor, she appeared on stage, screen and television throughout the 1960s and 70s, but is posthumously best known for Wanda, her only feature film.

Laida Lertxundi (born 1981) works with moving image, photography and printmaking, documenting the Californian landscape while engaging with questions of affect and subjectivity in relation to geography. Lertxundi received a MFA from the California Institute of the Arts and a BFA from Bard College.

The machine that kills bad people is, of course, the cinema - a medium that is so often and so visibly in service of a crushing status quo but which, in the right hands, is a fatal instrument of beauty, contestation, wonder, politics, poetry, new visions, testimonies, histories, dreams...

The machine that kills bad people is also a film club devoted to showing work—'mainstream' and experimental, known and unknown, historical and contemporary—that takes up this task. Borrowing their name from the Roberto Rossellini film of the same title, and finding inspiration in the eclectic juxtapositions of Amos Vogel's groundbreaking New York film society Cinema 16, they host a bi-monthly screening programme at the ICA.