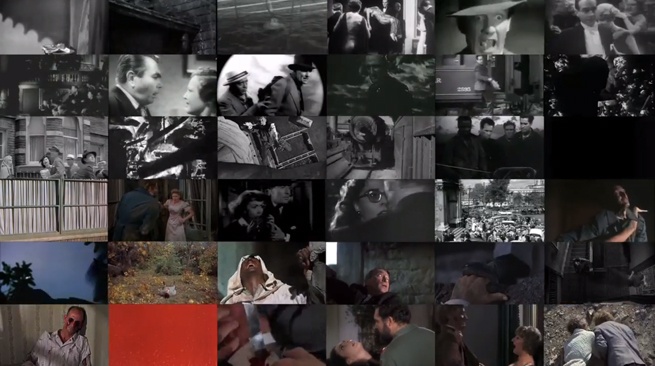 LSFF Discussion: Film Will Eat Itself

This January, shun the wealth of original stories in the London Short Film Festival programme and instead join Charlie Lyne (Ultraculture), director of upcoming teen movie documentary Beyond Clueless, for a crash course in collage filmmaking — the art of making movies from other movies. Across ninety rip-roaring minutes, you'll bear witness to some of the brightest, boldest, and most legally dubious films the genre has to offer, and meet a few of the hermitic freaks mad enough to put them together.

See the entirety of Hitchcock's oeuvre play out across a 36-window split-screen, find out whether Clarissa Explains It All really can explain all there is to know about artificial intelligence, and stare slack-jawed as the esteemed Prelinger film archive transforms before your eyes into a mind-altering CG phantasmagoria. And a chance to see internet sensation Noah on the big screen, a whole drama filmed entirely from the view on a laptop.

Join us in the bar afterwards for an evening of live music and DJs (entry free):

Mat Motte: After the demise of early 00s indie cult outfit Mower, whose album was produced by Blur’s Graham Coxon, singer and guitarist Mat Motte retired from music, but to return re-invented as a solo artist experimenting in lo-fi funk and hip hop. He appears tonight with guitar and drum loops in tow.

Astrothrone: Wayne Adams (Ladyscraper) and Oliver Barretts' (Bleeding Heart Narrative) new project, started in early 2013 as a melodic and song based outlet for both parties. Oliver Barretts' searing layered vocals with a TV On The Radio-esk feel are combined with a mix of wonky pop stylings and John Carpenter-esk synth noodlings to create a new breed of hazy synthetic pop.