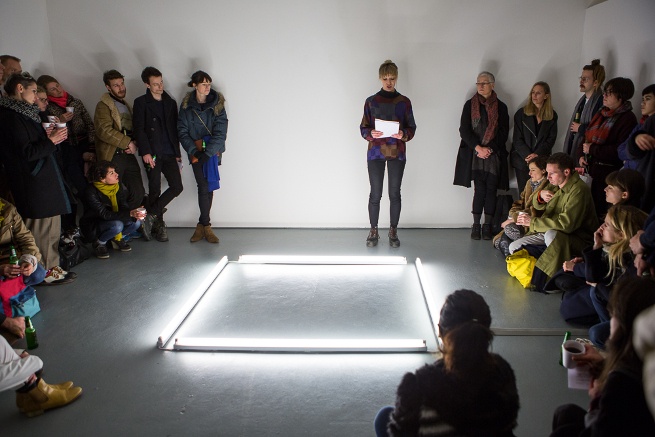 Coinciding with the exhibition Looks, an evening of performances by UK and international writers, poets and artists, that explores the revived interest in language in contemporary culture and its relationship to identity in a post-digital era. Participants include Nicole Bachmann, Sophie Collins, Andrew Durbin and Penny Goring.

We are delighted to announce Sophie Collins as one of the ICA’s new Associate Poets. Look out for a new range of events and projects responding to the growing intersection between art and poetry today.

Nicole Bachmann is an artist based in London. She’s also the co-founder of Performance as Publishing, a collaborative project with Ruth Beale, with shows at Classroom, New York Art Book Fair MoMA PS1, Modern Art Oxford, Turner Contemporary and Rowing. In addition to performances and installations for Performance as Publishing, Bachmann’s recent shows include Objective Considerations, MOTINTERNATIONAL project, Disappearing into One at the Zabludowicz Collection and she was selected for the 2014 Swiss Art Award exhibition.

Sophie Collins is co-founder and editor of tender, an online quarterly promoting work by female-identified writers and artists. Her poems have appeared in Poetry, Poetry London, The White Review, Ploughshares, Poetic Series (Sternberg Press), The Best British Poetry 2014 (Salt), and elsewhere. Reviews and essays are published in Prac Crit, Poetry Review and Dazed & Confused. In 2014 she received an Eric Gregory Award from the Society of Authors, and was a poet in residence at the LUMA/Westbau exhibition space in Zürich. She is now editing Currently & Emotion, an anthology of translations to be published by Test Centre in late 2015.

Andrew Durbin is the author of Mature Themes (Nightboat 2014) and the forthcoming Blonde Summer (Nightboat 2016). He is a contributing editor of Mousse and has written about art for Artforum, Flash Art, Texte zur Kunst, and elsewhere. A short book about early 20th century cults in Los Angeles is out from Kenning Editions in Fall 2015. He co-edits Wonder, curates at the Poetry Project, and lives in New York.

Penny Goring lives in London, makes things like DELETIA – self portrait with no self (New Museum/Rhizome 2015), LOVE TESTER DELUXE (Peanut Gallery Press 2014), EVERYWHERECLOUD (NewHive 2014) and is co-editor of MACRO - an anthology of image macros forthcoming from Boost House. PISSWAVE is an ongoing collaborative project with Hela Trol Pis.