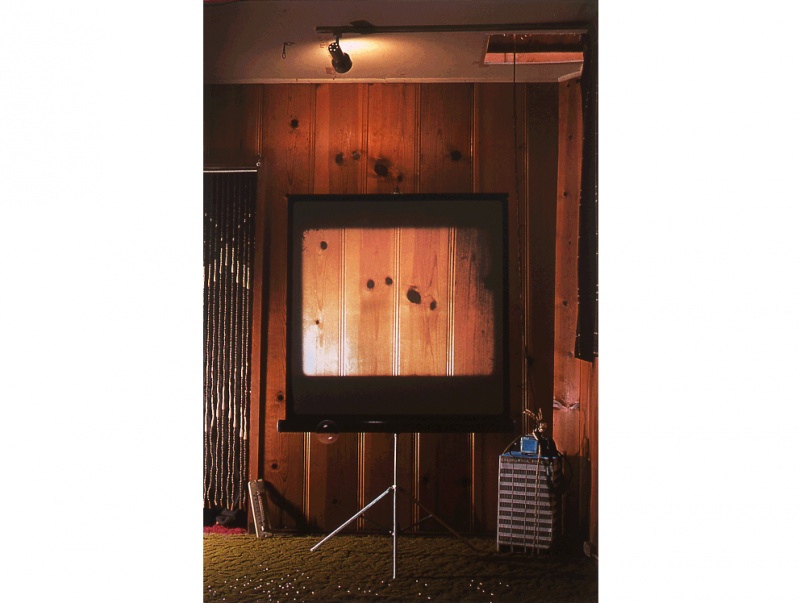 Julie Becker: I must create a Master Piece to pay the Rent

I must create a Master Piece to pay the Rent is the first survey exhibition devoted to the work of the late Julie Becker (1972–2016).

Embedded in the psychological, cinematic and material geographies of Los Angeles, her home city, Becker produced a legendary, yet underrepresented body of installations, sculpture, drawings, photographs and video. These works speak to the language and mythology of the late 20th century American Dream turned nightmare, drawing from sources as diverse as Stephen King’s The Shining, Disney’s fantasy The Gnome-Mobile, Kay Thompson’s children’s books Eloise and suburban stoner myths espousing the karmic convergence between The Wizard of Oz and Pink Floyd’s The Dark Side of the Moon.

Within Becker’s drawings and videos of dreamlike scenarios, and architectural spaces realised at actual scale or as models, such shared cultural references collide with an idiosyncratic, and at times, dark aura of childish wonder and projection. Becker once stated, ‘A refrigerator box, in American cities, can be the last refuge of the homeless. They’re also temporary places for children to play in.’ In her work, interior spaces appear psychically charged and provisional, conjuring sites for potential refuge and fantastical escape.

Becker reflected on her own living circumstances while constructing altered narratives around other real and fictional lives. Works such as the installation Researchers, Residents, A Place to Rest (1993–1996) and the open-ended series Whole, reflect the artist’s direct experiences of spaces of precarity, such as a single room occupancy hotel or a dilapidated building caught in the flux of real estate speculation. According to writer and filmmaker Chris Kraus, Researchers, Residents, A Place to Rest combines, ‘a Balzacian zeal to excavate urban archaeology through fiction, and a very post-modern willingness to acknowledge the strange penetrations and crossed subjectivities that occurred in the body and mind of the [artist] herself.’ In Whole, Becker channelled the lingering presence of her Echo Park building’s former inhabitant, who had passed away from an AIDS related illness. This multifaceted project of drawings, sculpture, photographs and video moves between an imagined life and the very real spectre of imminent gentrification and displacement.

Throughout her work, Becker navigated the formations of truth, fiction and myth in both the material and symbolic realm. Considering the present historical moment, where a real estate mogul-cum-reality TV celebrity occupies the position of ‘leader of the free world’, Becker’s singular aesthetic visions unerringly articulate the fantasies and dispossessions underpinning the social imaginary of late-capitalism.

This exhibition has been made possible through the support of the Julie Becker Exhibition Supporters Circle: lead support by Greene Naftali, New York; plus John Morace & Tom Kennedy, Ken Rowe and Chara Schreyer; and by the Friends of the Institute of Contemporary Arts.