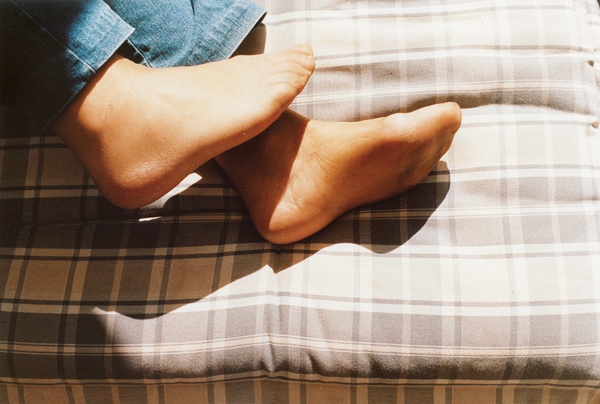 View a gallery of install shots from Juergen Teller: Woo! →

Considered one of the most important photographers of his generation, Juergen Teller is one of a few artists who has been able to operate successfully both in the art world and the world of commercial photography. This exhibition will provide a seamless journey through his landmark fashion and commercial photography from the 90s, presenting classic images of celebrities such as Lily Cole, Kurt Cobain and Vivienne Westwood, as well as more recent landscapes and family portraits.

Teller entered the London photography scene through the music industry taking photographs for record covers, it was Teller’s photograph of Sinéad O’Connor for her single Nothing Compares 2 You that marked an important moment in his career. Teller’s photographs first appeared in fashion magazines in the late 80s, and included portraits of Kate Moss when she was just fifteen years old. Teller’s images could be described as the antithesis of conventional fashion photography seen perhaps most markedly in his campaigns for Marc Jacobs.

Picture and Words introduces a series from his controversial weekly column in the magazine of Die Zeit which often provoked outcry amongst readers, and the exhibition will feature many of the letters of complaint that the magazine received. Irene im Wald and Keys to the House are Teller’s most recent bodies of work, revealing the photographer’s more personal world in his hometown in Germany and family home in Suffolk.

Teller’s provocative interventions in celebrity portraiture subvert the conventional relationship of the artist and model. Whatever the setting, all his subjects collaborate in a way that allows for the most surprising poses and emotional intensity. Driven by a desire to tell a story in every picture he takes, Teller has shaped his own distinct and instantly recognisable style which combines humour, self-mockery and an emotional honesty.

A selection of Teller's books and tear sheets from his editorial and advertising work will be on show in the Fox Reading Room.

With thanks to the Juergen Teller Exhibitions Supporters Group: Lehmann Maupin, Shane Akeroyd, Derek & Christine Wilson, The Edwin Fox Foundation, and others who wish to remain anonymous.