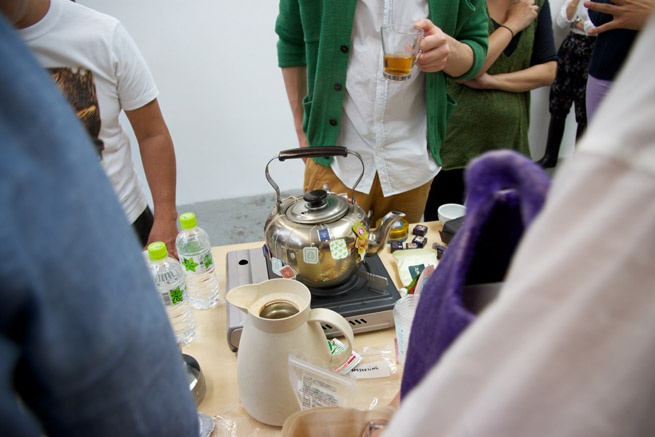 Participants are encouraged to bring any types of tea bags and tea leaves from their kitchen. Water will be boiled in an electric kettle and then tea made in a stovetop kettle. Once prepared, everyone will simply drink tea and chat.

Some may sense in the idea of "gathering to drink tea" something Oriental, or perhaps Japanese. Obviously it was Japan that produced the tea master Sen no Rikyu, and the tea ceremony is indeed one of those so-called "Japanese" pursuits. This project however has no superficial connections in that sense.   Fundamentally, I am a coffee drinker. But my coffee-only existence changed when I met my wife. She likes Pu-erh tea (a Chinese tea), so at mealtimes as a rule we drink tea. And the friends who visit us at home in Los Angeles bring us Japanese tea, slightly unusual blends of tea, herbal teas... When we go back to Japan for a while, again we invariably receive such teas. There are organic teas and the dieter's essential, rooibos tea. All kinds of tea are produced in all kinds of places all over this world.   When a friend married in Hong Kong, it was arranged that the artists would donate a work. I suggested gathering from across Hong Kong teas produced in various places and gifting the couple a tea made by mixing the lot. I attached a short note along the following lines:

When you drink a tea, you might find out where the tea leaves came from and also wonder about the place where they grow. Even though you've never been to the place, it may be the place you’ve been dreaming of - a little thing in terms of our daily lives, but one way we can connect to the world where we live, where we belong, where we may be able to contribute something. Drinking a tea is a metaphorical way of thinking about where we are.

Drinking tea also entails thinking about different lands, and the act of physically connecting that land and this body via tea leaves cultivated in a particular place.   Moreover in today's Japan, this fact is directly linked to a serious issue. The massive earthquake and tsunami of March 2011 was followed by the accident at the Fukushima Daiichi Nuclear Power Plant. This led to the sustained dispersal of invisible radiation/radioactive substances, forcing the Japanese daily to be aware of the land on which they live, and the very soil itself. Cumulative concentrations of radioactive material in the ground are measured every day, and decontamination performed if necessary. There are safe levels of contamination for agricultural produce as set by the government, but to many, these are suspect. To tackle radioactive contamination themselves, people endeavor where possible to drink bottled water as opposed to tap water, and be aware of where farm produce originates. Radiation dosimeters are now readily obtainable at major electrical shopping outlets, allowing people to measure radiation levels themselves. The effects have also appeared at Japanese supermarkets in Los Angeles. There they stock Brazilian tea produced by a Japanese firm called Yamamotoyama. In Brazil, with its long history of Japanese immigration, there has always been demand for tea, and no doubt the manufacturing base was already there.

On Sunday, 23 September 2012, a rainy day in Tokyo, I used social media to send out a call to friends and friends of those friends to bring me teas: from teas left neglected in the back of kitchen cupboards to their personal favorites. Setting up a large-ish kettle at the venue—Aoyama Meguro Gallery—I had them randomly place their tea bags and tea leaves in it. I suppose there would have been somewhere between forty and fifty people there. The kettle was crammed with countless varieties of tea, from green tea to oolong, herbal teas, Earl Grey, mint tea, Assam... the resulting brew was very dark in color, but everyone agreed, surprisingly drinkable. Many of those who came were people I'd never met, but quizzing each about the tea they'd brought along made a good conversation starter.   For the Hong Kong "tea" I wrote of earlier, tea leaves gathered, imported from various areas and countries, and sourced in one particular region, were mixed together in a "global blend" obtainable in one region, in this case Hong Kong. Here, it was the region that provided the theme. But in Tokyo, I had friends and acquaintances bring me tea leaves from their homes. This was a tea blend that changed depending on the people who assembled there, depending on the community, a one-off blend created by a one-off gathering of people. Here the focus shifted to the gathering itself.   A single tea bag connects us to the place the tea was grown, and to people. And to the problems of the world.