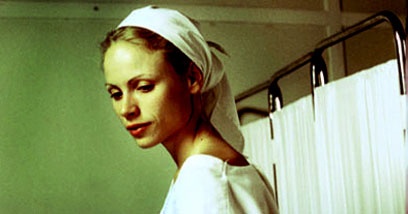 A remarkable new work from young Hungarian director Kornel Mundruczo. This time, the 31-year-old filmmaker tests the limits of his ambition with an opera film. Mundruczo's collaborative star Orsi Toth plays Joan, a young drug addict who falls into a coma after a traffic accident, only to awaken in the hospital with the new-found power to heal the sick. An unlikely but suitably otherworldly angel, Joan becomes a nurse at the hospital but soon finds herself persecuted by resentful fellow staff. Produced by Bela Tarr and with echoes of Lars Von Trier, Mundruczo's film is daring and sublime; it has a spirit moving through it which will also stir a receptive audience.

Competition: Win a meal for two at the Gay Hussar and Lonely Planet guides

To celebrate the opening of Johanna we present a competition to win a dinner for two at Europe's most celebrated Hungarian Restaurant, The Gay Hussar, located in the heart of Soho, and two Lonely Planet guides to Hungary.

To enter simply email before 28 Sept with the subject line "JOHANNA".