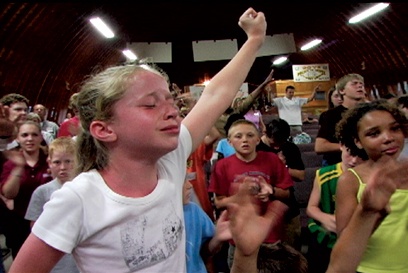 A powerful and absorbing documentary from filmmakers Heidi Ewing and Rachel Grady (who made 2005's brilliant film about inner-city children's lives, The Boys of Baraka).

Oscar-nominated Jesus Camp delves into the goings-on at the Kids on Fire evangelical camp in North Dakota, where children spend their summer playing Christian combat games, speaking in tongues and weeping with ecstasy as they confirm their love for Jesus. The camp's founder explains her mission to encourage the kids to 'take back America for Christ', and while there are opposing views on screen the film never takes sides, making the experience even more fascinating and disturbing.