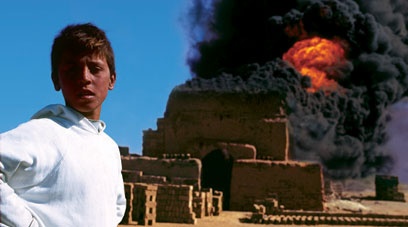 "A fascinating glimpse of an Iraq the mass media never shows us, the movie is a quiet revelation." Newsweek

Pushing beyond the form and frame of conventional documentaries, director James Longley creates a view of modern-day Iraq that, while familiar, couldn't be further from what we see on the news - this is filmmaking rather than reporting. Three chapters take us through Sunni, Shiite and Kurdish territory, with the immediate, verite footage and personal stories captured during two years of shooting taking on a poetic life of their own.

Longley's images and edits are capable of provoking jolting surprise - nearly every sequence provides a new way of looking at this occupied and divided country. With its collage-like form and bold use of visuals and sound, Iraq in Fragments sets out to not just tell us what's going on but to make us feel it too.

Iraq in Fragments was nominated for Best Documentary feature in the Academy Awards for 2006.