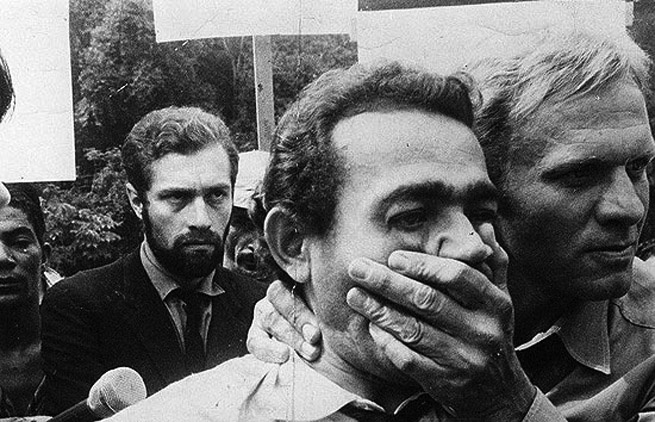 Terra em Transe is considered to be Glauber Rocha’s most controversial film, and at the same time his most powerful contribution to political cinema.

Rocha is a key figure of the Brazilian Cinema Novo, a movement born in the late 1950s and early 1960s as a response to political and social changes taking place in Brazil. Originally inspired by the French New Wave and Italian Neo-Realism, Cinema Novo filmmakers pushed further in their quest for subversive and revolutionary filmmaking by employing Brechtian techniques of distancing, the montage style of Eisenstein, and political symbolism. Rocha and other young filmmakers saw cinema as a potent tool in transforming social policies and consciousness. Their goal was to force the viewer to rethink the established values and conventions, and to push the audience to take an active and politically-involved role rather than a passive and complacent one.Terra em Transe was born out of this movement, and all of its stylistic and thematic elements can be traced in the film. Set in the fictional land of Eldorado, the film features an idealistic journalist who is caught between two equally powerful and dangerous politicians.

A part of Rocha’s trilogy of political films, made a few years after the 1964 right wing coup d’etat in Brazil, the film is a poetic account of political corruption, the selfishness of those in power and the failure of ideology. With potent images, revolutionary style and radical politics, Terra em Transe has been an influential film for political cinema in Brazil and elsewhere in the world.