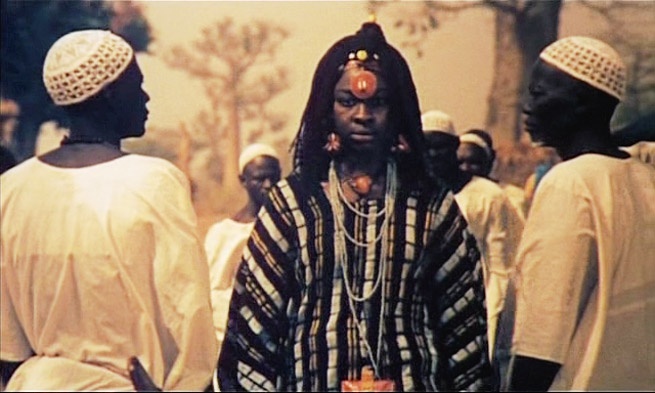 Directed by Ousmane Sembène, a prolific Senegalese director considered by many as the father of African cinema, Ceddo (translated as ‘common people’ or ‘outsiders’) explores Sembène’s recurring theme portraying Africa as a land of different oppositional groups, each of whom fights for independence and cultural identity.

Considered by many to be the most important example of African Third Cinema, Ceddo is set in an African village whose King converts to Islam and requires the villagers to do the same. In order to protest the forcible conversion to Islam and to fight for their religious freedom, the villagers kidnap the King’s daughter to use for negotiation. Sembène uses this simple story to examine how cultural continuity, threat of displacement, and infiltration of oppositional cultural forces play out within the African context. The village presented in the film becomes a microcosm for investigating how global forces, be it colonialism, imperialism or capitalism, affect African societies. The film portrays a reverence for traditional culture, which, in spite of imperialist attempts to colonise the continent, remains deeply bounded to African identity.

Ceddo itself is an important act of resistance, and presents a different picture of Africa from classical images. As opposed to the orientalism so often bounded with artistic renderings of Africa, Sembène’s film is filled with haunting and deeply empowering portraits of Senegal and Senegalese people. In particular, the role of a woman within the film's narrative as a strong character and an agent for social change is unique.

This 35mm screening will be accompanied by an introduction from ICA Film & Cinema Manager Nico Marzano who will offer an overview and insight into the work being screened.