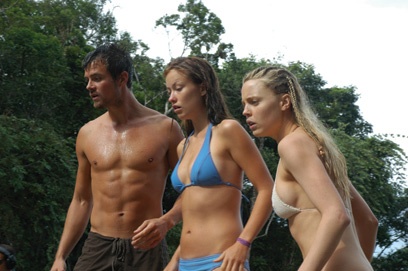 "Hostel with a tan-line" Variety

Formerly known as Turistas, this intense horror-thriller sends a group of American and British tourists off the beaten path and into the jungles and underwater caves of what our hapless protagonists was expecting to be an exotic idyll. No such luck - the lush surroundings quickly turn sinister as they stumble onto a secret plot to redress the imbalance between First and Third World countries using body parts. A sick, slick exercise in suspense.

Thanks to Lionsgate UK for this special preview

A satisfactorily gory, straightforward slasher film, produced by World Wrestling Entertainment, directed by former extreme hardcore pornographer Greg Dark (creator of the New Wave Hookers and Between the Cheeks series') and starring wrestling superstar Kane. The hulking leading man plays psycho Jacob Goodnight, who finds his home in a decrepit old hotel rudely intruded upon by a bunch of jabbering teen delinquents. Pretty soon, heads are being crushed, bodies inventively mutilated and eyeballs popping from sockets as Goodnight attempts to return to his state of peaceful privacy...