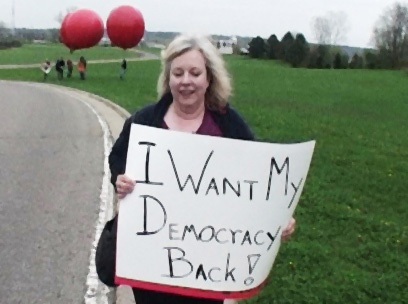 With local elections taking place throughout the UK on 3rd May, this timely, cautionary documentary exposes the gaping holes in the most important part of the democratic process. Electronic voting machines will be used for the upcoming elections, and currently count about 90% of the votes cast in America today. But are they reliable? Are they safe from tampering?

Filmed over three years Hacking Democracy follows the investigations of Seattle grandmother Bev Harris and her team of citizen activists as they take on the electronic voting industry. The film reveals incendiary evidence from the dumpsters of Texas to the ballot boxes of Ohio, exposing secrecy, votes in the trash, hackable software and election officials rigging the presidential election recount. Finally in Florida one brave election official gave Bev and her team access to his county's voting computers, with dramatic consequences. Proving the votes can be stolen without a trace Hacking Democracy culminates in a duel between Florida's voting machines and a computer hacker from Finland - with America's democracy at stake.

Directors Russell Michaels & Simon Ardizzone will be present for a Q&A with the audience after the premier screening on Friday 20 April.