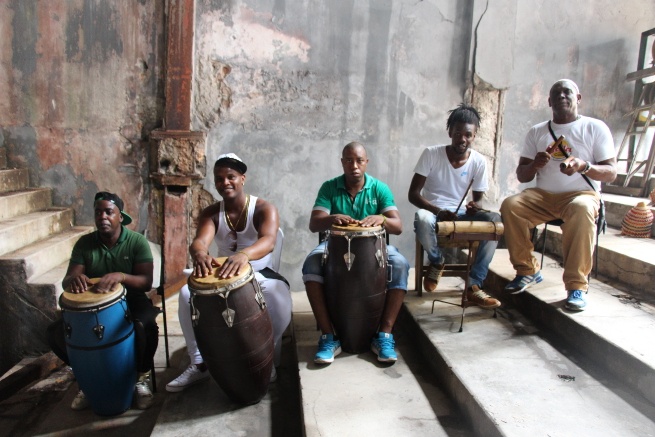 The latest chapter in the longstanding relationship between Gilles Peterson and the music of Cuba, this feature-length documentary by Charlie Inman sees him explore the roots of rumba. Featuring interviews with key figures across the island's musical generations, it provides an insight into rumba's continued significance in a country where a carefully preserved past has long sat side-by-side with innovation.

Produced in collaboration with rum-maker Havana Club, which created the Havana Cultura platform to promote contemporary Cuban culture, the film is is a continuation of a six-year relationship that has already given vital exposure to different aspects of Cuba's thriving music culture. This film is about tracing the through lines running from slave communities' spiritual drumming practices, the dancers and musicians who've preserved those traditions, through to the younger generation who've plucked out and re-contextualised the elements most exciting to them.

The history of rumba, inextricably tied up with the slave trade, uniquely intertwines West African and Iberian musical styles. With roots in the Congo, Nigeria, Benin and Cameroon, different African religious institutions such as Ifa, Ekpe and Nkisi were remade in Cuba as Lukumi (Santeria), Palo, Abakua and Arara. As such, the religious and social realities instituted by the African diaspora have a distinct, if complex, connection to the rhythms foundational to contemporary club music.

The three main styles of rumba are guaganco, yambu and columbia. As well as forming an important part of the documentary, unpacking these differing styles has become an important part of the wider Havana Cultura project's exploration of rumba. Peterson worked with the esteemed rumberos to record versions of the three styles now set to be reworked by a number of producers working in electronic music in the UK and beyond. Where the film depicts the lineage descending from the working class communities of Havana and Matanzas to modern-day dancefloors, this other arm of the project allows for an exciting, global re-interpretation of rumba's roots. An album with these original tracks will be released next year.

As a DJ and tastemaker who's always been interested in joining dots that might not seem so obvious, it should come as no surprise to see Peterson documenting a set of connections that have previously been overlooked. He says:

“Rumba is in every set that I play as a DJ. Being invited to take part in rumba culture, with some of its most influential players, couldn't have made more clear what a vital force it still is in modern Cuba. From the homemade claves you find in most houses to the quinto drums driving Havana's clubs, rumba influence is everywhere.”

The film runs for 73 minutes.