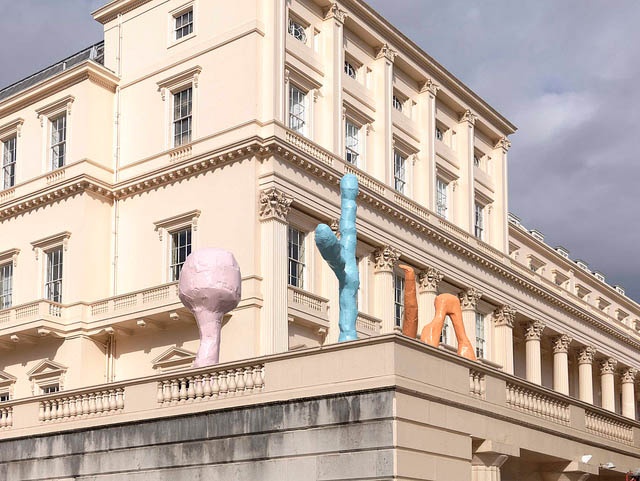 A three-part sculpture by Austrian artist Franz West installed on the roof of the ICA on The Mall.

The installation consists of three large lacquered aluminium abstract parts. Their varying shapes, the tallest of which is 5m high, define the space around them and continues an extensive series of important public projects by the artist. These include The Garden of Earthly Delight at the Belvedere, Vienna (2009), The Ego and the Id in Central Park, New York (2008), and Les Pommes d’Adam in Place Vendôme, Paris (2007). Room in London was previously installed in the Piazza di Pietra in Rome in 2009/10.

West continually strives to create a dialogue between his work and the public, encouraging the viewer to interact with his sculptures and creating relationships that complete the work of art as an active reality. Since the Seventies, the artist's production has included a series of portable sculptures called Adaptives, plaster objects that the viewer can pick up and use, as well as furniture, chairs, couches, and other functional sculptures that take on the form of an art work precisely because they can be used and taken advantage of by the viewer, like a stage set filled with actors.

Room in London is part of the City of Westminster’s City of Sculpture initiative, which encourages and promotes the display of sculpture in public spaces throughout the borough, and includes self-guided tours of contemporary public sculpture in Westminster.