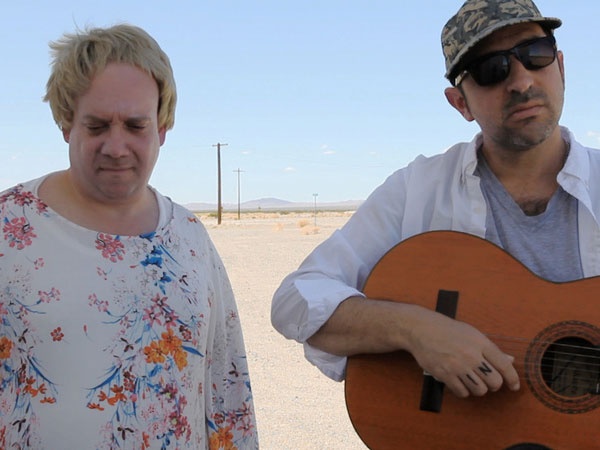 In parallel to our current survey on Julie Becker’s work, the ICA presents the UK premiere of Amboy (2015), a feature-length film by artist Frances Scholz, co-written and produced by science fiction writer Mark von Schlegell. Amboy is based amid the cultural mythologies, fakery and shared hallucinations of Los Angeles, and unfolds through a series of interwoven, unscripted encounters and fictional storylines.
Scholz begins by following a filmmaker documenting the life of Lydia van Vogt, the widow of science fiction writer A E van Vogt. The documentarian’s path takes an unexpected turn when they begin focusing on the fictive artist Karl Amboy (a veiled analogy to the late-artist Jason Rhoades), or rather, who the mysterious Amboy might be. Scholz joins the documentarian as they leave LA for the Mojave Desert in search of a ghost town bearing Amboy’s name.
The film's screenplay describes Amboy as the ‘male-ist fanaticism of Western American culture’, which is offset by the collaborative and open form of production, featuring cameos and contributions from the likes of Paul Giamatti, Eleanor Antin, Penny Arcade, Chris Kraus, Andrea Fraser, Colm Tóibín, Leslie Allison and Lily Benson. Musical contributions are from Stephen Malkmus, Holy Shit and Kath Bloom.
Go to Artists’ Film Club