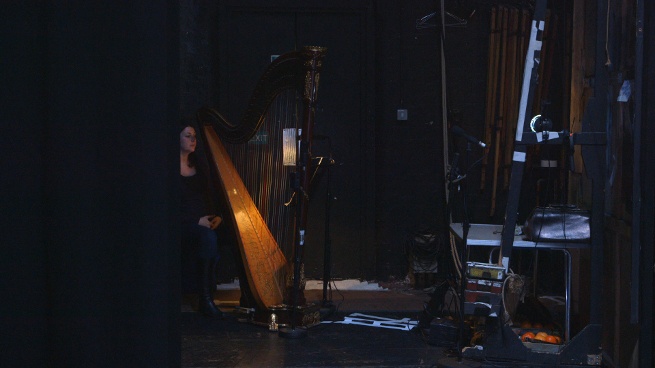 A talk by fig-2 curator Fatos Üstek, with an introduction by artist Lynne Marsh to her current project at fig-2.

The talk adresses the acceleration of female positions in today’s cultural production from curating to artistry, from running large-scale art institutions to art galleries and art fairs. The fact that many women are functioning as key players in their respective scenes today introduces a shift in the collective production of visual culture. Fatos draws a contemporary map of London’s art scene while reflecting on her personal history of being an independent curator for over a decade, initiating and realising her own projects on an international scale.

For the 45th week of the fig-2 programme Lynne Marsh presents a new long-form film installation tracking the processes surrounding the performance of an opera. Mimicking the framing device of a play within a play, the project maps the dramatic trajectory of La Traviata onto the activities happening off stage during its performances at The Grand Theatre and Opera House in Leeds. Back-stage crew, off-stage performers and stage-management develop as characters in overlaying narratives during the 3 acts of the live performance. With a focus on the routine labour around the stage, the work provides insight on the nature of performance, explores the relationship of operatic music and its grand narrative to the visual screen-based image and brings operatic tradition into context with present-day realities.

The two-hour film is co-produced with Opera North and presents La Traviata in its entirety. Screening times will be announced.

UK Friends of the National Museum of Women in the Arts (UK Friends of NMWA) raises awareness of contributions by women in the UK to the arts, past and present, organising monthly events highlighting the accomplishments of women artists, including discussions with artists, private visits to museums, galleries and private collections, studio visits and lectures. UK Friends of NMWA circulate a monthly newsletter highlighting achievements and current exhibitions of women artists throughout the UK and help UK-based art by women achieve international recognition with NMWA’s Women to Watch programme.