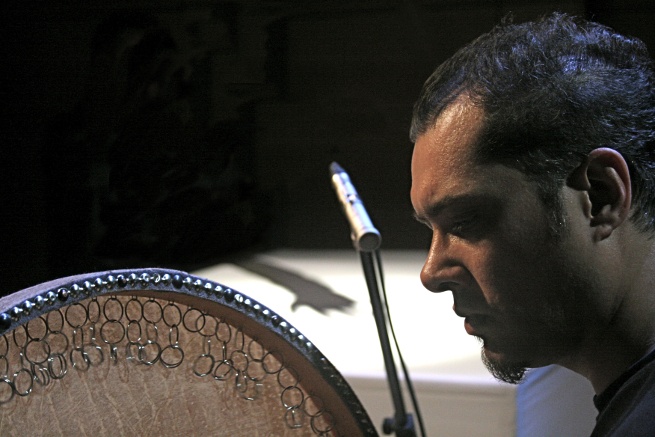 Seth Ayyaz will perform a triptych of electroacoustic works addressing Islamic sonic culture. ‘makharej’ is a trajectory through the Arabic letters; ‘The Remainder’ investigates medieval number theory and algorithm; ‘the bird ghost at the zaouia’ addresses religious debates and place.  The title of the elecroacoustic triptych, On the Admissibility of Sound, echos Al-Ghazalli's 11th century text 'On the Permissibility of Listening To Music' a cautionary tale about the contagious effects of music as virtue or poison.

The triptych is concerned with the unseen, unspoken and potentially revolutionary problematics of interrogating power in the Islamic sonic-social. Listening operates within these pieces to reveal these regimens of power. The three related pieces aim to disassemble the pronunciation of the divine authority of the Arabic letters (makharej), number (The Remainder) and the religious permissibility of music and sound (the bird ghost at the zaouia).

Makharej (2009) is primarily addresses opening the spaces of the letters, drawing equally from the traditions of Qur’anic recitations (tilawa and tajwid) and sound poetry (such as Kurt Schwitters’ Ursonate).

The Remainder (2013) deals with theological debates from mediaeval Islamic mathematics and investigates number and algorithmic structure.

the bird ghost at the zaouia (2010) is based on field recordings made by attending various religious rituals across the MENASA region.  It investigates the boundary between music and non-music within Shariah (dubbed as the sama’ polemic), and intervenes into space, location and place using recordings taken from Islamic sacred contexts. In all three pieces contemporary electroacoustic techniques of sound synthesis and spatialisation are brought to bear on ‘traditional’ Islamic musical concerns such as the recitation of Qu’ran, adhan, voice, the admissibility of music, number theory applied to maqammat  (pitch) and iqaat (rhythm).