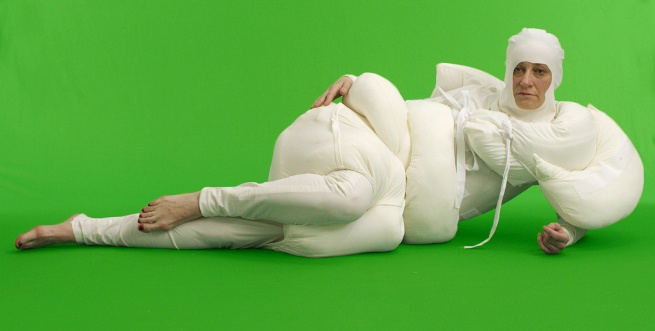 Adam Broomberg and Oliver Chanarin’s site-specific work for ﬁg-2 interrogates the landscape that surrounds the ICA Studio, incorporating the Mall, Downing Street, Horse Guards Parade and Buckingham Palace; an area characterised by daily military parades and other displays of state power. Broomberg & Chanarin have invited a bouffon or ‘Dark Clown’ to respond to this highly militarised environment. The ﬁgure of the bouffon, originated in medieval times and was used as a term to describe someone ostracised from society and relegated to the margins of the city – apart from one day of the year, when he or she was invited to the Royal Court with explicit permission to ridicule the authorities. For one week Broomberg & Chanarin will transform the ﬁg-2 premises into a ‘green screen’ studio for the bouffon to inhabit. Her grotesque and vulgar presence suggests a counterpoint to the military codes of discipline and hierarchical order on display in the surrounding streets. The live performance, consisting of slapstick routines and gallows humour, will take place during the opening event and on Thursday evening, simultaneously merging with video footage of the changing of the guards and other military ceremonies. The bouffon will be played by Hannah Ringham, and the performance will be accompanied by a raucous soundtrack, composed by drummer Kid Millions.

Broomberg and Chanarin’s project at fig-2 has been realised with the expertise and generosity of Pundersons Gardens.

Please note this is a durational performance and entry is with Day Membership.