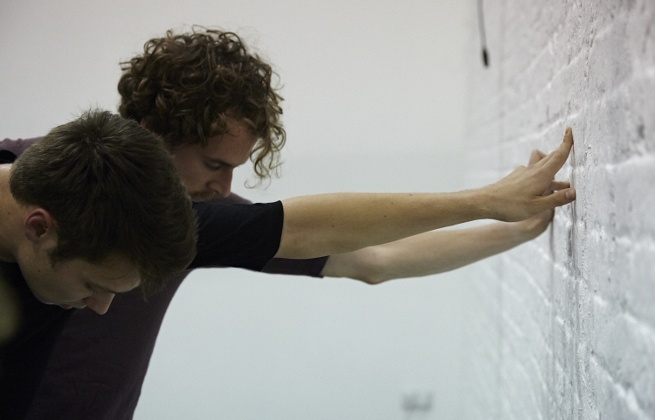 Sculptor Eva Rothschild and choreographer Joe Moran take the first step in a fresh new collaboration for Block Universe Performance Art Festival in partnership with fig-2, an independent project resident at the ICA. Navigating the meeting points and tensions between their sculptural and choreographic concerns, Rothschild and Moran explore the shared and conflicting materiality of the body and the sculptural object.

Presented in both the Studio and Theatre at the ICA, A Setup brings existing film and performance works into relationship with new sculptural interventions. Rothschild’s film Boys and Sculpture (Whitechapel Gallery Children’s Art Commission, 2012) and Moran’s In Land (2008) will be shown in the ICA Studio with benches by Rothschild. Moran’s durational performance installation, Singular (2011) will be performed on the 11, 12 and 13 June in the ICA Theatre with sculptures made for the space and performance by Rothschild.

A Setup is commissioned and co-produced by Block Universe and Fig-2, in partnership with Dance Art Foundation and Eva Rothschild Studio and supported by the National Lottery through Arts Council England.

Visitors can attend at any point during the following times:

Joe Moran (1977) is a choreographer, dancer and Artistic Director of Dance Art Foundation, through which his performance and curatorial work is produced. Moran’s work has been presented in theatres, galleries and public spaces gaining recognition for its intelligence, complexity and disruptive engagement with convention. Recent commissions and touring include David Roberts Art Foundation (Frieze, 2014), Nottingham Contemporary (2014), Assembly (UK tour, 2014), The Modulated Body (2013) commissioned by Ordovas for Movement & Gravity, Bacon and Rodin exhibition; and The Place Prize (2013). Affiliate Artist with C-DaRE (Centre for Dance Research at Coventry University) and Dance4 Associate Artist, Joe works extensively in the visual arts and is a guest artist at a number of institutions, currently at The Place and the Royal Opera House.

Block Universe is a new performance art festival for London taking place this 8-14 June. Bringing together a new wave of cutting edge performance art at the cross-section of visual art, dance and music, Block Universe will activate major institutions and venues throughout London over the course of a week. Venue partners include fig-2, the ICA, the Royal Academy of Arts, Somerset House and unique off-site historic venues such as Stationers Hall and the Art Workers Guild amongst others.