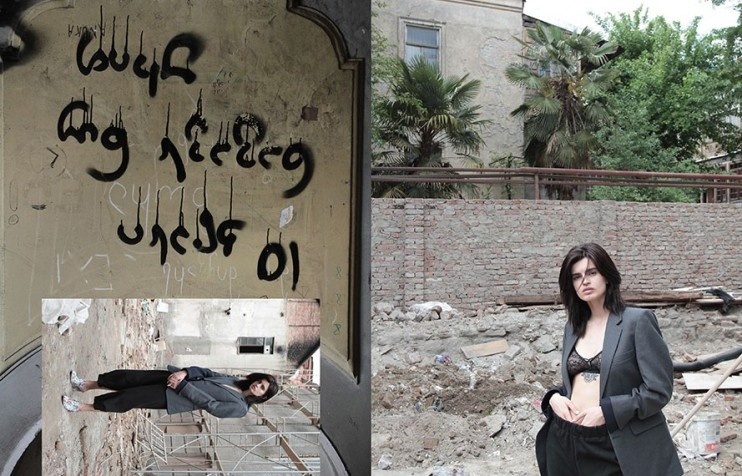 Fashion and the New East: Made in Georgia

Due to an unexpected issue with the visa authorisation process, we are sorry to announce that Irakli Rusadze is no longer able to travel to London for this event. In place of his participation, we will be screening a short filmed presentation by the designer. In addition, More is Love founder Ana Mokia now joins the panel

Fashion historian Djurdja Bartlett chairs a panel exploring how fashion reacts to and embraces the global crisis of borders and displacement. Taking the current Western interest in young Georgian design as a particular case study and starting point, this features Tbilisi-based designer Tamuna Ingorokva and More is Love founder Ana Mokia, alongside writer and curator Anastasiia Fedorova. A short filmed presentation by Tbilisi-based designer Irakli Rusadze will be screened.

Addressing the current Georgian fashion scene, the panel asks how young fashion designers can establish their own narrative in the globalised fashion world and how do borders work to delineate nation and collective visual identities, especially in the context of rising nationalism.

This is presented as part of New Borders, New Boundaries: Fashion in the Shifting World, in partnership with TrAIN: The Research Centre for Transnational Art, Identity and Nation, University of the Arts London and Calvert 22. This three-day events series engages writers, historians and a number of young designers from Austria, Georgia, Ukraine and the UK, who live and work between their homeland and the West and who creatively draw on their heritage in their engagement with the field of Western fashion.

Dr Djurdja Bartlett is Reader in Histories and Cultures of Fashion at the London College of Fashion, University of the Arts London, and also a member of TrAIN, UAL. Bartlett is author of FashionEast: The Spectre That Haunted Socialism (2010). Her monograph European Fashion Histories: Style, Society and Politics is forthcoming (2019), and she is also editor of a book on fashion and politics (2019).

Anastasiia Fedorova is a writer, curator and cultural critic based in London. She is a regular contributor to Dazed, i-D, GARAGE, 032c, The Guardian, Highsnobiety, BoF and The Calvert Journal, among other titles. Fedorova is co-curator of Post-Soviet Visions: image and identity in the new Eastern Europe, Calvert 22 Space, 22 February–15 April 2018.

Tamuna Ingorokva studied at the Academy of Art in Tbilisi prior to graduating from ESMOD Paris International Fashion University in 2001. She established her womenswear label Ingorokva in Tbilisi in 2002. Known for strikingly strong minimalism and an abundant use of leather and silk, all of her pieces are tailored in an atelier in Tbilisi.

Ana Mokia is co-founder of More is Love, established in 2013 in partnership with Nino Eliava. More is Love stocks up-and-coming international designers and hand-picks Georgian designers. On their fifth anniversary, More is Love has opened a flagship store in the heart of Tbilisi.

Irakli Rusadze is a self-taught Georgian fashion designer raised in the 1990s during a time of inflation and famine caused by civil war and the collapse of the Soviet economy. Rusadze is known for his roughly-cut and unusual forms, and for the creative infusion of cultural motifs into his designs. Rusadze represents brands Situationist and Aznauri, designing non-heteronormative, minimalist clothing for those with a non-conforming attitude towards fashion.

With support from the British Georgian Society