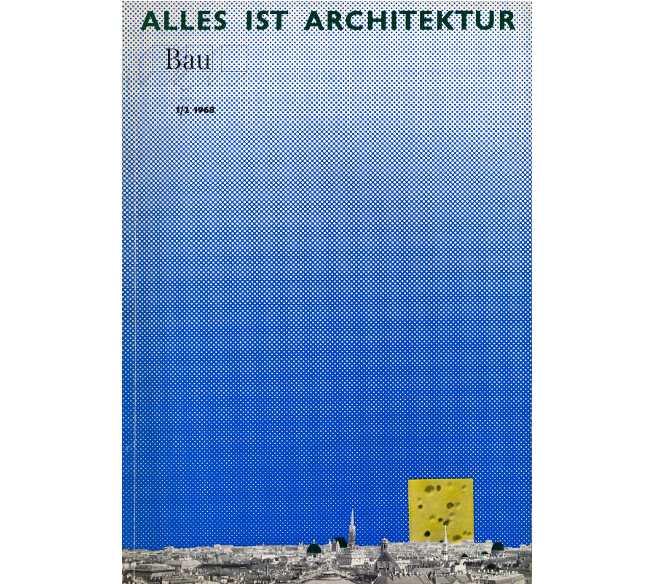 Everything is Architecture: Bau Magazine from the 60s and 70s

The ICA is delighted to present the first significant presentation in the UK of the influential Vienna-based architectural magazine Bau: Magazine for Architecture and Urban Planning, published by the Central Association of Austrian Architects. The seminal architect Peter Cook, founder of experimental group Archigram and former ICA Director discussed the period around the exhibition on 19 June 2015.

The display includes original issues of the magazine published between 1965 and 1970; a period when a group of influential Austrian architects and artists including Sokratis Dimitriou, Günther Feuerstein, Hans Hollein, Gustav Peichl, Walter Pichler and Oswald Oberhuber, took over its editorship. The magazine became a platform to explore new experimental ideas which considered architecture beyond mere concrete and instead ventured into the realms of art and politics. This radical interdisciplinary approach to architecture was crystallised in the 1968 issue of Bau in which the highly influential architect Hans Hollein boldly claimed that 'Everything is Architecture'. From a lipstick, a portrait of Che Guevara to an astronaut suit and the performances of the Viennese Actionist Otto Mühl, all could be considered architectural, aiming to question the pre-war functionality that defined modernist architecture.

Bau demarcated itself from other experimental publications of the time through its size, which was closer to that of a glossy fashion magazine, as well as its creative use of advertising. While the magazine included key texts by philosophers, artists and architects, it also retained a playful quality, rich in imagery drawn from architecture and urbanism but also art and popular culture.

While new experiments in architecture were flourishing internationally with the likes of Archigram and Street Farmer in the UK, Metabolism in Japan, and the publication Domus in Italy, Austria played a key role during this period with several other architectural figures such as COOP HIMMELB[L]AU, Haus-Rucker-Co, ZÜND-UP and Salz der Erde, who introduced collage, drawing, performance and film into their architectural practice. The exhibition also includes rarely seen experimental short films by these architectural groups. Although this is the first significant presentation of Bau in the UK, the ICA hosted an exhibition of architectural graphics in 1973 that included Adolfo Natalini, Hans Hollein and Coop Himmelb(l)au.